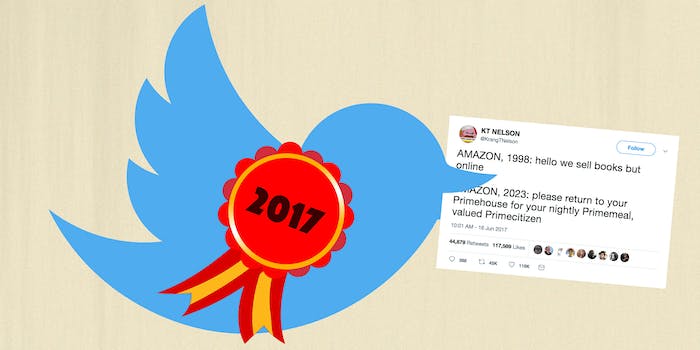 As 2016 drew to a close, it seemed like Twitter couldn’t get any worse. The year had been dominated by Russian bots and white supremacist agitators, and as it drew to a close, it was Time for Some Game Theory. Had the bad website finally hit rock bottom? A year later, we know that it absolutely had not. It hardly seems possible, but 2017 brought even hotter takes and even steamier garbage: Verritt authentication codes, battles between roses and corncobs, Kurt Eichenwald looking at anime porn. Each oozing pustule of “free speech” was worst than the last. And then there were Twitter’s policies—Nazis and anime avatars ran wild, while anyone who challenged them was reported for abuse and suspended from the site.

But we kept coming back to drink from Twitter’s poisoned well, day after day. Why? Stockholm Syndrome, for sure. But also good jokes. They were rare, but when they were good, they were very good. They made us, for a brief moment, stop regretting that human beings ever developed language.

Here are the indisputable greatest tweets of 2017. These are them. There are no appeals. Don’t @ me.

Today is gonna be the day that they're gonna throw it back to you pic.twitter.com/qCoF30eEWK

Ten years ago we had Johnny Skills, Steve Jobs, and Bob Wages. Now we have the Democratic Party.

Welcome to your 30s. You now have Home Advil and Purse Advil.

The reality is, a vanilla soy latte is a type of three-bean soup.

"How tall are you?"
"Me? Oh, I'm roughly the pic.twitter.com/CUvLxP4aq1

When your straight friend Jean makes a funny joke pic.twitter.com/o180oOeqye

I'm no geologist but this is quite an interesting Rock formation. pic.twitter.com/oPrh6j1y2x

the guy who brings his own lamp to the archives is back. when I asked him about it last time all he said back was "I'm not fucking around" pic.twitter.com/ba5AwcomxJ

iPhone Settings was once challenged to write a story using only four words, pic.twitter.com/wuQZgxyL0s

I always find it funny when idols use korean honorifics when talking bout western artist..However, I've yet found anything funnier than this pic.twitter.com/svJwIFZSJf

I have eaten
the baby shoes
that were
for sale

Forgive me
they were delicious
so small
and never worn

Saving this screenshot for when my grandkids ask me what 2017 was like. pic.twitter.com/oFt0Nm86wP

AMAZON, 2023: please return to your Primehouse for your nightly Primemeal, valued Primecitizen

Bojack: you inherit your parents' trauma but you will never fully understand it

Me: haha the cops a cat

[being interviewed after losing beatboxing battle] were you just saying "p-p-p-pulled pork sandwiches" over and over?

welcome to 99 percent invisible, im Roman Mars. theres a picture that is seen frequently online. A pig, pooping on its own balls. this pictu

wife: I just got stung by a jellyfish. quick, pee on it
me: [peeing on jellyfish] this is for stinging my wife

When you and your hideous family are hungry as hale and arguing over what to have delivered, because Heatherd wants Mexican, Gorkon wants a bread-rrito and KKaseYy wants chicken tartare pic.twitter.com/pvTVeVQjjv

This is still the greatest of all time. pic.twitter.com/3PZNJNWduM

Adult friendship = 2 people saying "I haven't seen you in forever! We should really hang out more" over and over again until one of you dies

trebek: this true cause of aging eventually kills you

contestant: [visibly shaken] what is nostalgia

*looks at straight couple* "But which one of you is the dungeon and which is the dragon?"

but doctor….. i AM pagliacci pic.twitter.com/8X7SiK4Gtt

People who write dumb tweets should get shipped off to Eichenwald or Daou.

May you and your love ones have a joyous holiday season and a prosperous new year. And, in 2018, may you find the strength to Log Off.