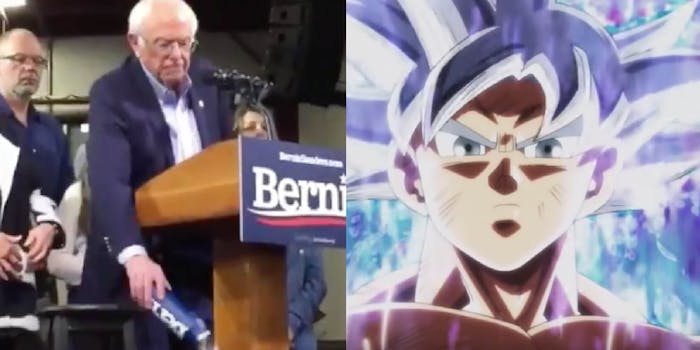 Some used the TikTok to express awe at Bernie Sanders' reflexes.

This viral TikTok by created by user @josedanieeeeeel of Sen. Bernie Sanders (I-Vt.) knocking over a water bottle and catching it before it falls is actually a reference to Dragon Ball Super, the sequel series of the seminal anime Dragon Ball Z.

In the TikTok, Sanders is seen knocking over a metal water bottle while at a podium. The music dramatically shifts to Goku’s “Ultra Instinct” theme song, and after a few close-up shots of bystanders waiting in shock at the act Sanders is about to perform, Sanders quickly grabs the bottle out of the air and stands it back upright without missing a beat.

The TikTok was used by some as a testament to Sanders’ ability to keep his reflexes sharp despite his age and to show awe at the fact that when he managed this feat, Sanders was currently in the middle of speaking to an audience at a rally.

Questions regarding former Vice President Joe Biden’s ability to hypothetically to do this were also made in reference to the TikTok. Biden’s public speaking events have come to be characterized by certain gaffes and confusing moments. Most recently, Biden erroneously introduced his wife as his little sister at a speech to supporters in California after the Super Tuesday primaries.