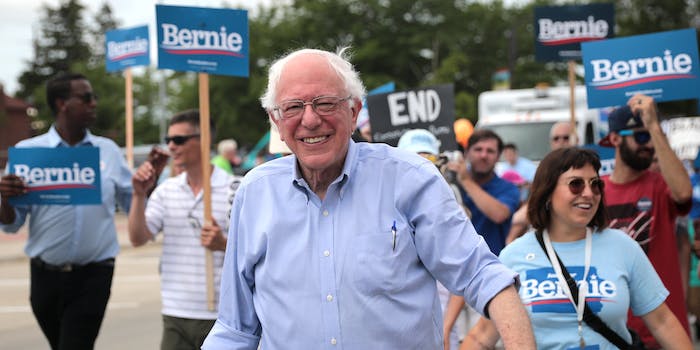 What was Bernie looking at? Only he knows!

In what will undoubtedly come as a huge surprise, Sen. Bernie Sanders has once again found himself the subject of a new meme. This time, due to a photo in which he could be seen looking up at the sky while talking on his cell phone.

The photo originated last Thursday, March 5, as Sanders took an impromptu stroll through a nondescript suburban neighborhood on his way to a rally at Veterans Memorial Coliseum in Phoenix, Arizona. It is believed that a local resident snapped the photo, which was then shared by the Arizona-based ABC 15 News affiliate.

Sanders—who squares off today against former Vice President Joe Biden in primary elections across Idaho, Michigan, Mississippi, Missouri, Washington, and North Dakota—later told ABC 15 reporter Steve Irvin that he was speaking with his wife on the phone. (We know, real exciting stuff!)

At any rate, as the images began going viral, it didn’t take long before people started to speculate at just what Bernie Sanders was looking up at in the first photo. The thing became a full-blown meme as jokesters on Twitter proceeded to add a second image to complete the narrative.

In some of the earlier examples, Twitter user Michael Chau (@Srirachachau) tweeted screenshots from the Twin Peaks revival series and the 1996 comedy Happy Gilmore. In the latter scene, the ghosts of Chubbs (Carl Weathers), the alligator who bit off Chubbs’ hand, and Abraham Lincoln look down at Adam Sandler’s titular character from heaven.

From there, others joined in on the fun, as you can see in the examples below. One user imagined Bernie Sanders looking at a perfectly normal photo of a horse standing on a roof. Another added a screenshot from the film Blade Runner 2049, and so on.

A naked guy on a roof? Who among us wouldn’t stare?

Chau also added a few more imagining who Bernie Sanders might be on the phone with, such as Moe Szyslak from The Simpsons or Tom Hanks in Sully.

Had Bernie Sanders actually been talking a pilot through an emergency water landing after both airplane engines became disabled, would that be enough to put him ahead of Biden? A hard maybe!