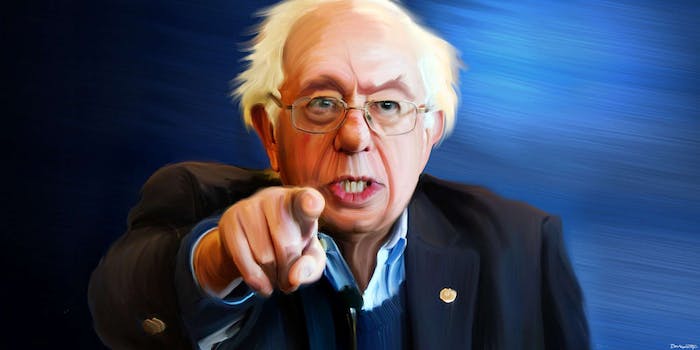 The dangers of the Bernie Sanders hype machine

The Internet's favorite progressive faces a number of obstacles to the nomination.

If the hype around his campaign is any indication, you might think that Bernie Sanders had already gotten the Democratic nomination.

The Vermont Senator’s popularity as an Internet phenomenon has been building steadily over the past few months—to the point where it’s reached a fever pitch. He’s all but taken over Reddit’s Politics subreddit, as well as racking up over 58,000 followers on his own r/SandersForPresident. That grassroots excitement has even followed him offline, where he’s started to draw crowds in the tens of thousands at his campaign rallies.

Indeed, the Bernie Sanders love has become so overwhelming that some have even claimed that he could be the next FDR. It’s a bold claim for a candidate who has yet to get elected—let alone participate in a campaign debate.

The problem with this deluge of hype is that as exciting as Sanders’ platform and his message are, we’re still many, many months away from an election, and all this attention could hurt him as much as it helps him. Bernie Sanders may be the great, liberal savior that we all want him to be, the next coming of the New Deal, but he’s got a long way to go before getting the nomination—and could very well lose steam before then.

More than anything else right now, Sanders’ key challenge is to avoid peaking too soon. An early lead isn’t necessarily a bad thing in politics, but burning too bright right out of the gate can be the kiss of death. Timing is everything in Washington, and any number of problems can conspire to end a campaign before it even begins. Look at Chris Christie, who peaked too soon by not running for president a few years ago. When he announced his candidacy last week, he was all but an afterthought.

And when Ted Cruz announced his campaign back in March, Politico ran a story about the unfortunate fates of early announcers in the presidential race over the past few years. In 2012, it was Newt Gingrich who got there too soon. In 2008, it was Kansas governor Sam Brownback on the right and Iowa governor Tom Vilsack on the left. And who could forget Senator Howard Dean’s spectacular flameout in 2004?

The Bernie Sanders love has become so overwhelming that some have even claimed that he could be the next FDR. It’s a bold claim for a candidate who has yet to get elected—let alone participate in a campaign debate.

In fact, in the last few election cycles, the only candidate to come close to winning  after gaining an early lead was Al Gore, who was finishing up his second term as Vice President in the year 2000.

Sanders doesn’t fit the mold of an early frontrunner—and he continues to trail Clinton in national polls—but the principle is the same. As strong as he looks today, there are a myriad of challenges just waiting to face his campaign. Politico’s Katie Glueck presciently warns: “Plenty of those who move early have buckled under fundraising pressure or simply can’t maintain the spotlight. Meanwhile, better-known candidates, especially those with a stable of big donors, can afford to wait as those in lower tiers fight it out.”

The fact that Sanders isn’t relying on big donors for fundraising is part of what makes him so appealing, but unfortunately, it’s factors like that which will also challenge his campaign’s longevity. His popularity now isn’t anything to scoff at, but in presidential politics, the early bird doesn’t always get the worm.

Peaking too soon isn’t the only danger in being a political golden boy. Let’s not forget the frenzy surrounding the first Obama campaign back in 2008. The mantras of “hope” and “change” were in the air, and it was undeniably an exciting time. The energy was palpable. Anything felt possible.

Obama, however, has spent the subsequent years trying to live up to that promise. For the president’s detractors, his failure to shut down Guantanamo Bay, as well as his support of the military drone program and NSA surveillance highlight his “unfulfilled promise.” That’s exactly what Julian Zelizer argued in a 2013 editorial for CNN: “Over the years, it has become clear that Obama left much more of Bush’s foreign policy framework in place than many of his supporters had expected.” For Zelizer, Obama’s administration was merely more of the same.

“Perhaps it was always unrealistic to expect ambitious systemic reforms,” writes the Atlantic’s Conor Friedersdorf.  “Yet it remains the case that many Americans voted for Obama precisely because he promised to attempt them.”

Echoing Barack Obama’s 2008 campaign, Bernie Sanders has likewise promised sweeping systemic reforms—and may face the same roadblocks to creating change as Obama. Bernie Sanders has made a career of subverting both the system and expectations, but if he were to get elected, there’s no guarantee he would be able to fight Congress and Washington’s highly partisan culture of complacency.

But the biggest obstacle to Sanders’ success isn’t the Beltway but his own campaign. Despite the rallies, the Internet fandom, the talk show appearances, and the bold proclamations, Bernie Sanders remains a dark horse—and he continues to be treated that way. This isn’t helped by the media, which continue to see him as a novelty, despite and perhaps because of his early campaign success.

As Slate’s Josh Voorhees puts it:

It really would take a miracle for Sanders to overcome Hillary Clinton—by some metrics the most dominant nonincumbent in history—to win the nomination, and that’s information that reporters have both the right and the responsibility to share with readers. The problem isn’t that the media isn’t treating Sanders like a legitimate presidential contender; the problem is that they’re failing to treat him like a legitimate candidate.

Until Sanders’ success is viewed less as a miracle and more as a legitimate stepping stone to the White House, his status as an underdog is unlikely to change. And make no mistake about Hillary Clinton’s place as the frontrunner. No matter what you’ve read lately, this is her election to lose.

“Sanders has very little establishment backing,” writes Harry Enten at FiveThirtyEight. “Of the 111 governors, senators, and members of the House to have endorsed a Democratic candidate, 100 percent have endorsed Clinton. Only Gore in 2000 came close to winning this large a percentage of the endorsements at this point in the campaign. Clinton’s support comes from north, south, east, west, black, Latino, and white.”

For progressives, Bernie Sanders is the superstar of the moment. But among D.C. insiders, the story is somewhat different. While Sanders may be gaining populist favor, Washington and the media largely view him as a socialist outsider, and his lack of relationships with the establishment will be a major challenge for him in the long run. Recent reports suggest that the Clinton campaign is shaking in its boots, as Sanders is gaining in Iowa, but that doesn’t mean they will be six months from now.

Hype is a funny thing, because as soon as it starts, you’re dooming yourself to failure if you don’t deliver. There’s a lot of excitement around Bernie Sanders right now, and it’s nothing if not good for the presidential race. Sadly though, we shouldn’t be surprised if the Bernie Sanders hype machine starts to experience engine trouble soon enough.