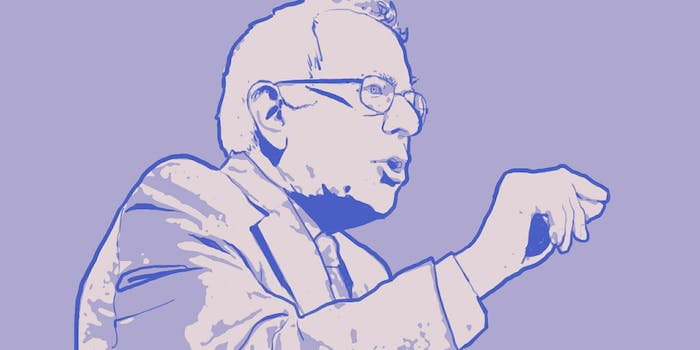 When it came to America's mass shooting epidemic, the Vermont Senator's comments missed the mark.

Sen. Bernie Sanders (I-Vt.) waffled during last night’s debate when he was asked about his gun control record, and despite the candidate’s widespread online popularity—especially on Reddit—the Internet definitely took note.

Although Sanders wasn’t the only Democrat on that stage with a record of opposing gun control legislation, the other candidate with a similar background—former Senator Jim Webb—openly embraced his past positions on the subject. Sanders, by contrast, tried to find common ground with gun control advocates—even as he defended his spotty record as the product of a desire to build a consensus between both sides of the issue.

When criticized by Hillary Clinton for voting against the Brady Bill, Sanders replied that “when we develop that consensus, we can finally, finally do something to address this issue.” Shortly thereafter, when former Maryland governor Martin O’Malley talked about his success in passing gun control legislation—despite facing a large contingency of conservative Democrats in his own state—Sanders argued that “the views on gun control in rural states are different than in urban states.” In his opinion, a president’s job must be “to bring people together around strong, common sense gun legislation.”

While Sanders is correct about the need for strong gun control legislation, he fails to understand the nature of firearm politics in America today. The problem isn’t that gun control advocates aren’t willing to accept that their views on guns are different from those in rural communities. The biggest issue facing the gun control movement today is that the National Rifle Association is unwilling to compromise whatsoever when it comes to necessary reforms.

“The NRA had once been a sportsman and safety organization, which took a turn toward the political back in the ’70s, just as the conservative movement was gaining steam,” explains Heather Digby Parton of Salon. “By the ’90s it had transformed itself into a potent political institution which perversely thrived when it was attacked, and built its clout by never giving an inch. Ever.”

The biggest issue facing the gun control movement today is that the National Rifle Association is unwilling to compromise whatsoever when it comes to necessary reforms.

Beyond the NRA, however, there is a large contingent of conservative Americans who are convinced that any effort to regulate firearms is the first step toward government tyranny.

“Focusing exclusively on the lobbying angle overlooks the very real fear and distrust with which many gun owners regard the government that drives much of the opposition to gun laws,” points out David A. Graham of The Atlantic. “Many of them simply don’t believe that enhanced background checks—or whatever other modest changes are proposed—are what they appear to be.”

As a result of this political paranoia, it has become impossible for anyone who takes a centrist stance on gun control—that is, someone who falls between the extremes of either wanting to confiscate all guns or have virtually no regulations at all—to dispel the suspicions of the pro-gun community. Indeed, as Sanders correctly noted, he has a D- record from the NRA despite the number of occasions he has sided with them—all because, every now and then, he doesn’t.

All of those measures were supported by a clear majority of the American public—and in the case of mandating criminal background checks, more than 90 percent—but it sadly didn’t matter. Thanks to the NRA and pro-gun grassroots’ ironclad grip over Congressional Republicans and conservative Democrats, even this moderate measure wasn’t able to make it to the floor.

This is precisely why recent reports are circulating that Obama plans to use his executive powers to issue an order that would bypass the legislature altogether. In order to get anything done, you can’t do it through Congress.

In addition to flubbing the origins of America’s current impasse on gun control, Sanders also failed to fully account for his own record on the issue. As both moderator Anderson Cooper and Hillary Clinton pointed out, Sanders voted against the Brady Bill of 1993, which would have established background checks on firearms and supported legislation that would have made it illegal to sue gun manufacturers and sellers when their firearms were misused. Although Sanders now supports background checks, he never explained why he opposed the Brady Bill at the time or how he has arrived at his current position.

As Sanders correctly noted, he has a D- record from the NRA despite the number of occasions he has sided with them—all because, every now and then, he doesn’t.

Sanders was more forthcoming when it came to prohibiting lawsuits against gun manufacturers and sellers, saying that he doesn’t think gun shop owners who commit legal transactions should be held responsible if “somebody goes out and does something crazy.” At the same time, he then conceded, “Where you have manufacturers and where you have gun shops knowingly giving guns to criminals or aiding and abetting that, of course we should take action.”

This statement conflicts with the facts on the issue: Leading legal scholars agree that the bill Sanders supported, Protection of Lawful Commerce in Arms Act, makes it impossible for even those manufacturers and shops to be held accountable. A product of the George W. Bush administration, Media Matters’ Sergio Munoz explains that the 2005 act “immunized gun makers and dealers from civil lawsuits for the crimes committed with the products they sell, a significant barrier to a comprehensive gun violence prevention strategy.” Munoz argues that the bill essentially “shields the firearm industry.”

Perhaps the worst part of all this is that Sanders’ rural background isn’t as an excuse for his poor record on gun legislation. In fact, that history is what puts Sanders in a unique position to take a stand against pro-gun hardliners.

As historian Rick Perlstein recently wrote in an op-ed for Salon, Sanders’ message of economic populism is starting to resonate in many of the Red States that would otherwise never vote for a Democratic presidential candidate. When combined with the passionate support he commands among progressives, Sanders could conceivably break through the impenetrable wall of mistrust that has been built up by right-wing lobbies like the NRA.

Indeed, one of his opponents on that stage managed to do exactly that. When Sanders tried his “rural state” defense on O’Malley, the ex-governor reminded Sanders that the Eastern Shore and Western Maryland are very conservative on gun-related issues, yet “we were able to pass this and still respect the hunting traditions of people who live in our rural areas.”

Bernie Sanders is dead set on reaching across the aisle on this issue, but in order to do so, he might want to start by listening to the people around him. Otherwise, his heart might be in the right place, but his politics will continue to miss the mark.