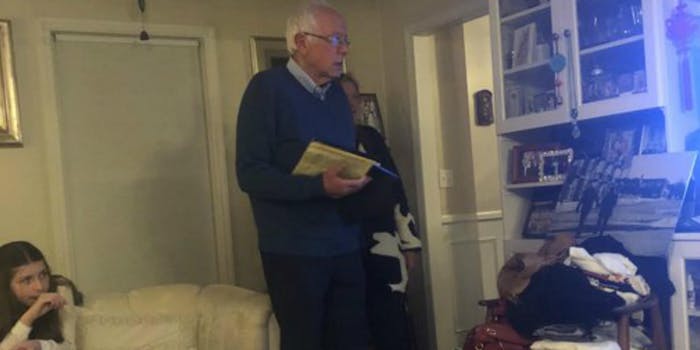 'Further proof that Bernie is a man of the people.'

Everyone seems to have that chair in their house. You know, a designated area for all the clothes that have yet to be folded or put away. As it turns out, even a presidential candidate has one.

“Watching and waiting for the results from various races throughout the country,” Levi tweeted. In the photo, Sanders can be seen watching a TV and standing next to a chair that has a stack of clothes and other miscellaneous items on it. The clothes on the chair are even propping up a photograph meant to be mounted on a wall.

People were shook to learn that, just like them, Sanders has a “clothes chair.”

“I’m voting for a president that has a clothes chair so beyond redemption that it’s used to hold up a picture,” Twitter user @abbyangriest wrote.

People just couldn’t get enough of the relatable content.

“Further proof that bernie is a man of the people – he has ‘the chair,'” Twitter user @thefouchoe wrote.

The comparison photo of Trump’s living room comes from a Refinery29 feature on First Lady Melania Trump. The room is located in the penthouse suite of Trump Tower, which is one of the many residences Trump owns. The penthouse takes up three floors and is estimated to be worth $64 million–though Trump himself has previously said it’s worth $200 million.

The comparison photos of Biden’s home appear to come from a Daily Mail story that mentions the Northern Virginia house the Bidens rent. The house, which consists of five bedrooms and two bathrooms, sets the Bidens back an estimated $20,000 a month, according to the Patch. Biden also owns two homes in Delaware, which are worth $4 million combined, according to Forbes.

The photo of Sanders next to his clothes chair appears to have been taken in one of his two Vermont homes, which consists of four bedrooms and was purchased for $405,000, according to Business Insider. Sanders and his wife Jane Sanders also own a one-bedroom townhouse in Washington, D.C.–all three residences were each purchased for around $500,000.