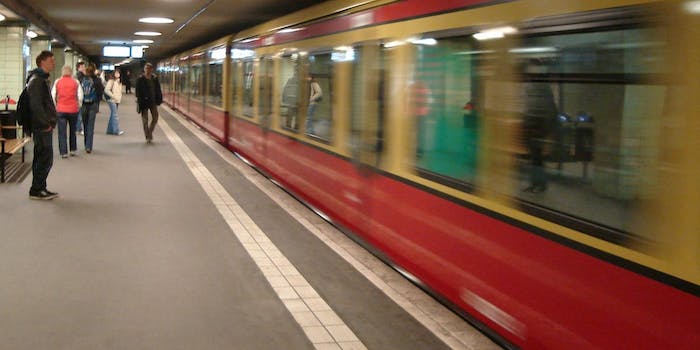 "The S Bahn is full. Nobody intervenes. … He opened his pants and came up to me."

As four men reportedly sexually harassed a woman on a Berlin train, one charging her with his pants down and another threatening to put out a lit cigarette on her genitals, the victim documented the abuse on Twitter.

The woman shared a number of tweets and photos on Saturday evening as she was targeted on the busy S-Bahn train, according to The Local. Her account, @totalreflexion, has since been set to private.

She accused the men of using gendered insults; one man reportedly threatened to stub a lit cigarette on her genitals. She told that man she’d take a photo of him and publish it to Twitter.

She alleges that the man then exposed himself and approached her with his pants open. No one intervened. She exited the train at the next station and told four women who comforted her that there was no point in going to the police—”they can’t do anything.” She eventually did contact law enforcement.

Here’s a segment of what she wrote, according to The Local:

I’m being called a whore and a c**t by four men. One of them lit a cigarette and said he’d put it on my p***y.

He’s taken out his c**k. I scream at him. The S Bahn is full. Nobody intervenes.

He opened his pants and came up to me. His friends hold him back. I get out at the next stop and cry.

Detailing sexual harassment on Twitter and the Internet is not a new phenomenon. Sites like Hollaback urge victims of street harassment to document and share incidents to call out their harassers.

In fact, the woman who sent the tweets regarding Saturday’s incident is a founding member of the “Aufschrei” (outcry) movement. Women are asked to share their experiences of everyday sexism using the #Aufschrei hashtag. In the first week of the campaign in January, there were reportedly more than 50,000 tweets bearing the tag.

There are echoes of the Adria Richards case in this situation.

Richards tweeted a photo of men she believed to be making inappropriate sexual jokes at a conference in March. One of those men lost his job, and Richards was besieged with rape and death threats by misogynists. She too lost her job over the incident.

@totalreflexion was also subjected to abuse after reporting the harassment and sharing the photo. One person suggested the men calling her a “whore” was her fault due to what she was wearing. Another urged her to “enjoy your SUICIDE!”

Many users leapt to the woman’s defense, applauding her for sharing the photo of the men and offering their support.

Dear @totalreflexion: you are brave & now need to heal. Sending best wishes. Good for you for posting the pic. #lovebomb

Dear @totalreflexion: you are brave as hell, & that was some scary shit. Good for you for posting the pic. #lovebomb #aufschrei @ihollaback

The Local reports that sexism has been under the spotlight in Germany this year. In January, a female journalist accused Economy Minister Rainer Brüderle of making inappropriate advances

German President Joachim Gauck called for a “more active” debate on the issue, while 80 percent of German women don’t think the country has achieved gender equality, according to a March survey.