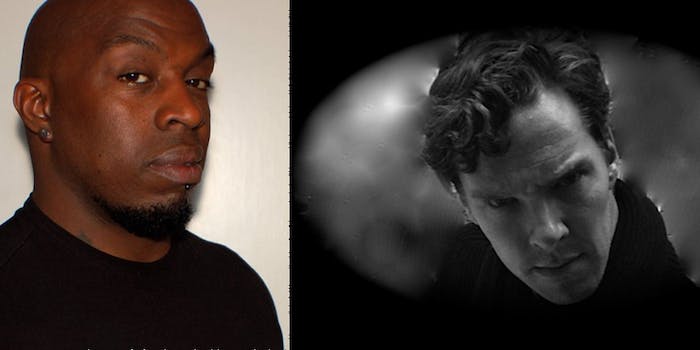 With four days to go, Little Favours has raised more than $115,000. Not bad for a first timer's short film project.

What’s the quickest way to crowdfund your independent short film without a lot of hassle?

Make sure it stars someone with one of the most intense fanbases on the planet.

If, before the U.S. opening of Star Trek Into Darkness, one had any doubt about the enormous star power of its resident villain, Sherlock and Hobbit star Benedict Cumberbatch, then Indiegogo has sealed it. Through the crowdfunding website, 500 zealous Cumberbatch fans—part of the “Cumbercollective,” as they are sometimes called—have so far raised more than $115,000 to fund a short film, Little Favours, starring the posh Brit and fellow U.K. actor Nick Moran.

The film’s original fundraising goal was £25,000 ($38,000), which they easily exceeded once news of the star made the rounds within fandom. Cumberbatch fans more than doubled the average donor amount for an Indiegogo campaign, contributing an average of $230 each to the film. While many of the donors confessed they were contributing out of love for fellow actor Moran and Cumberbatch’s fellow producer and bestie Adam Ackland (grandson of famed British actor Joss Ackland), most of the fans were eager to see their favorite otter back in front of a camera.

Been with BC all day and updating him on what’s been happening. As he has been doing so much press for ST and shooting Sherlock…

He has been unaware of the sensational response. He is blown away and wants to thank all so much for supporting this project and…

BC’s words: ‘Your generosity, pragmatism and loyalty is inspiring. A million thanks for a million kindnesses. Bx’

From the Indiegogo campaign page, here’s the film summary:

LITTLE FAVOUR follows the story of WALLACE (Benedict Cumberbatch) when he is contacted by a former colleague to help him out with a deal gone wrong.

It’s been 7 years since he left Her Majesty’s service and 10 years since the American Counter part who became his friend, saved his life on a joint mission in Iraq. He’s migrated his skill set into a lucrative business while managing to keep his secret battle with PTSD under wraps. One day, while finally deciding to try his hand at a functional relationship, his old friend JAMES cashes in his chip and asks a LITTLE FAVOUR. How could he refuse when he owes the man his life?

The project is a first from novice writer/director and former Marine Patrick Monroe, better known to fandom as “P-Nut,” the fitness and weight trainer responsible for creating Tom Hardy’s impressive physique in Bronson, Warrior, and The Dark Knight Rises. Monroe worked as Cumberbatch’s personal trainer on the set of Into Darkness. (There’s a considerable irony in the fact that Monroe’s directorial debut is being crowdfunded by Cumberbatch’s fanbase and not Hardy’s; while Hardy and Monroe were once inseparable, Hardy’s rising fame seems to have led to a cooled friendship, though Monroe remains hugely popular with Hardy’s fans.)

Monroe’s only previous directorial credit is another short film called Oscar’s Escape. But with a production budget with a $75,000 windfall, heads will undoubtedly be turned in Monroe’s direction.

Since Veronica Mars‘ $5.7 million Kickstarter film and the successful funding of Zach Braff’s Garden State sequel, many critics of crowd funding have been hotly debating the negative consequences of asking fans to fund popular projects without the benefit of investorship. But with the advent of fandom as an organized, mainstreamed Internet community, to those creators and actors who have cultivated their fanbases, Kickstarter and Indiegogo campaigns are theirs for the funding. Though few actors are lucky enough to win the intense fannish love that Cumberbatch has won through Sherlock, loyal fanbases for projects like Homestuck and The Lizzie Bennet Diaries have paid off for the creators, raising $2.5 million and $460,000 respectively for the projects in massive shows of fan loyalty and love.

Though Cumberbatch has come on board as producer as well as actor, Little Favours is likely to remain a small-scale production. But with four days remaining in the Indiegogo campaign, there’s plenty of time for the Sherlockians and the Cumbercollective to throw in their hand.

And who knows? Maybe the film itself will end up being as memorable as the campaign that funded it.