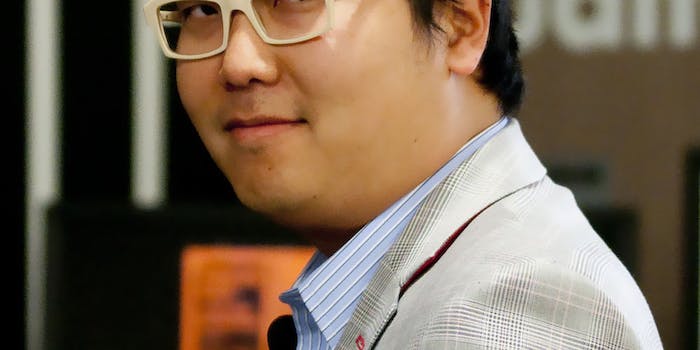 The CEO of Cheezburger Network wants to move on from lolcats to change the way we consume breaking news.

Over the last five years, the Seattle entrepreneur has turned the cat-plus-funny-caption site I Can Has Cheezburger into an Internet-comedy network that now includes four more brands: Fail Blog, Know Your Meme, The Daily What, and Memebase.

“It’s the happiness of here and now,” Huh says of the Cheezburger Network, an iced soy caramel macchiato in hand at a Starbucks in Midtown Manhattan.

“We are very much about enjoying the moment. We’re not, like, controversial. We’re a mirror into the people who enjoy the content. If you go to Memebase, a lot of rage comics have to do with everyday life. They’re basically a Seinfeldian view of comedy. It’s not television comedy where it’s outrageous, like Two and a Half Men-style. It’s about living everyday life, and it resonates with a lot of people. …

“That’s the type of humor we specialize in.”

A notoriously shabby dresser, Huh is decked out this Friday afternoon in a crisp, tailored suit, wearing his trademark white frames. He’s set to film an episode of MSNBC’s Caught on Camera. After that, Huh’s turning his focus to South by Southwest, where he’s organizing a massive rendition of Werewolf, a strategic word-based, role-playing game (also known as Mafia).

The Daily Dot caught up with Huh outside his hotel to talk about the theory of his empire and his plans to change the way we consume breaking news.

Daily Dot: What’s the idea behind your latest big project, Circa news?

I wanted to rethink journalism from the ground up. Like, how would you tackle breaking news? [Look at] the way wire stories are done. It follows the old newspaper model, where they had different editions for far-out suburbs. They take the first few paragraphs of an existing story and update it. The rest of the article is exactly the same.

On the Internet, there’s no editions; there’s just live, 24/7. So what they keep slapping on the homepages on these patron news outlets are these wire stories, and halfway through the story you’re like “Wait, I’ve read this story before.” It’s weird to me that you have to constantly find a way to refresh the homepage in hopes that the editor serves this to you. That really sucks.

We don’t know exactly how the mechanism will work. It’ll be designed for a mobile device. Basically, we want to be the home for your news on your mobile device.

DD: Will Circa be the sixth Cheezburger brand?

Circa will have a separate corporate structure. It’ll have no ties to Cheezburger whatsoever.

DD: A lot of people were surprised you blacked out your homepage to protest the Stop Online Piracy Act. Was that your executive decision?

It was my executive decision. And I encountered zero protests from the company. In fact, employees were very much on board, and that was very touching.

DD: It wasn’t a tough decision for you to make, joining sites like Wikipedia in the blackout?

It was a tough decision. Wikipedia doesn’t have advertising, so they’re not required to show a certain number of ads to generate revenue. We do.

By putting up a roadblock, and a blackout screen, we turned away a lot of users. We drove a lot of users to a page [with instructions for how people could contact their representatives]. We generated no revenue from that, and it was costly for us to run. But those people picked up their phones. Something like 300,000 people took action of some sort.

DD: How much is your patronage of these sites a business decision, where you’re saying “this is reaching so many people,” versus pure belief in remix culture?

I would say I’m a believer in remix culture first. And then we happened to make a business out of it. … You have to have belief in it first, before you can actually make that leap.

DD: Is there a lolcat community? Are there Lolcat-Americans?

I would say yes, but I would also say Cheezburger as a community is something that’s only forming right now. It used to be the communities were independently site-driven, like, Fail Blog community, I Can Has Cheezburger community. But now they’re intermingling more. We see more cross-traffic between our sites.

The average person sees two or more sites now. People identify not just with the sites they visit, but with the parent company. In the near months we’re starting to push the idea of Cheezburger as a community. We’ll be building more tools to help them out.

DD: What kind of tools?

I’ll give you an example. Right now, if you log into a Cheezburger account, when you go comment, there’s no single sign-up. You can’t take your identity from Memebase to Fail Blog. We want more messaging between users, to get people to identify one another and engage one another. We’re also trying out, ironically, Facebook commenting, the option of using real identities.

DD: I’m very curious how Fail Blog commenters would respond, being outed like that.

It might be awesome. It might be bad. What we don’t shy away from is trying new things. Every time we do something new, people are like, “Why do you keep changing stuff?” And we’re like, “It’s the Internet.”

DD: Do you see a sixth Cheezburger brand anytime soon?

Yes, we do. In our five brands, there’s now almost 60 sites. I don’t think I’m ready to talk about the sixth just yet, but wait for it in April.

Internet memes still today are a tiny, tiny, tiny fraction of popular culture. And at some point it’s going to merge with popular culture, and I don’t know what that looks like. Rock & roll used to be subculture. Look what happened there.