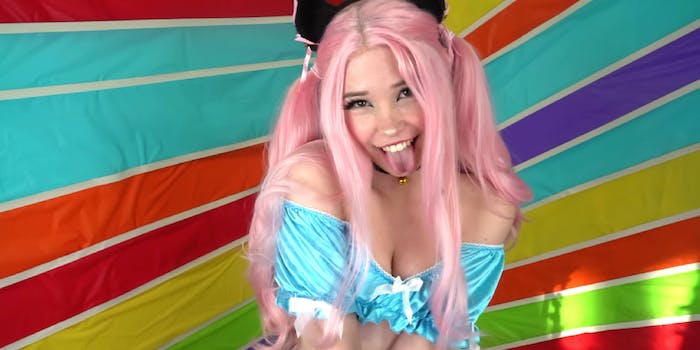 The pictures are pretty disturbing and very not safe for work.

When Belle Delphine posted pictures from her latest shoot directly on Twitter, the theme combined with the lack of a trigger warning upset a lot of people. Now people are debating on whether or not to “cancel” her once again.

Delphine shared four stills from what she called her “perfect first date,” showing her tied up and gagged with duct tape in the back of a van and being anally penetrated pressed up against a tree.

Some pointed out that survivors of sexual violence, who wouldn’t be expecting anything like this based on the accompanying text to her photos, could easily be hurt or triggered by seeing the image.

Others focused on her style of dress which, coupled with her signature demeaner that many consider purposely child-like, led them to view this piece as a fetishization of the abduction and rape of children.

Delphine later tweeted that “I’m not sorry, here’s why” with an essay attached in which she addressed the criticism she’s received over the shoot. Her statement included the claim that she doesn’t dress like a child and that, as a porn actress, there is no need for her to censor the contents of her timeline. However, many Twitter users disagreed with her statements, sharing examples from previous shoots where they felt she was presenting in a particularly child-like manner and pointing out that Twitter frequently shows tweets to people from accounts they aren’t actually following. That could result in people who aren’t familiar with Delphine’s body of work to click on the image expecting to see something completely different.

Meanwhile, Delphine’s defenders are still hitting back, saying there’s nothing wrong with depicting this in a pornographic fantasy context and it’s unreasonable to expect her to use a trigger warning for her posts.