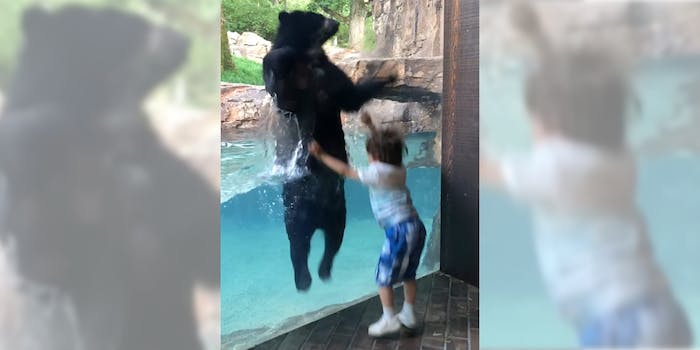 Jumping with a bear had to be the highlight of this kid's day.

A 5-year-old boy named Ian had a big day at the Nashville Zoo recently. Ian and his dad, Patrick Parker, say they visit the zoo often, and on this particular occasion, Ian made a new friend, an Andean bear, native to South America.

Ian approached the glass to watch the bear and got so excited he started jumping up and down. The bear must have decided that looked like fun because it got in the water and started hopping up and down along with the little boy.

IMITATION GAME: This bear lets his inner child out as he jumps in unison with a 5-year-old boy at the Nashville Zoo. https://t.co/bHmO0y8vMa pic.twitter.com/6MfqEu3R4y

Ian’s dad said the jumping session lasted around ten minutes, which seems like enough time tire out both a bear and a boy.

Take a break and watch this if your soul needs some soothing (and even if it doesn't). https://t.co/wYP7sXoaM5

If the bear looks a little different to you, that’s because the Andean bear is also known as the spectacled bear, since they tend to have dark black fur with lighter colored fur around their face and upper chest.

They are the only remaining bear species in South America and are listed as “vulnerable” by the International Union for Conservation of Nature.

While it’s easy to think that this bear saw young Ian as more of a potential snack than a playmate, you don’t need to worry. Although Andean bears do occasionally eat meat, in the wild 90-95% of their diet is plant-based, and since it’s probably being well fed at the zoo, it’s a fair guess that the bear hopped in the water to have some fun, not to grab lunch.