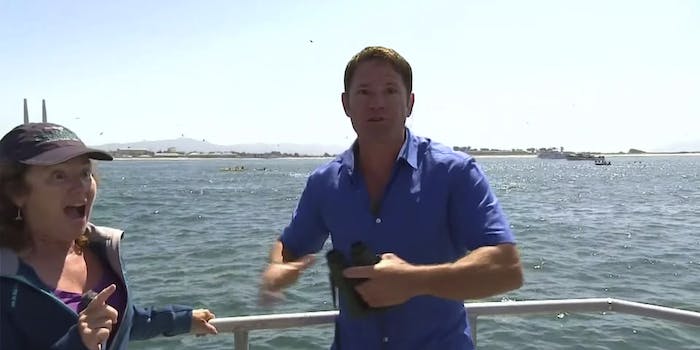 We dare you to not smile at their sheer joy.

It’s generally bad etiquette to interrupt a live television interview, but these rules go completely out the window if you happen to be a blue whale. If you’re a blue whale, that means you’re an endangered species, and it’d make anyone’s day extremely grand if you stopped by to interrupt them.

In fact, if you’re a blue whale, and the interview you’re interrupting happens to be between a naturalist BBC personality and a whale expert, that’s pretty much the greatest thing you could ever do for either of them. That’s exactly what happened here, when BBC One host Steve Backshall’s interview with whale expert Doris Welch was cut short by the largest animal on Earth:

It’s quite a miracle that a TV host with an accent was on hand for this extremely rare sighting—something about the British accent makes it at least 10 times more thrilling. Backshall tweeted the following response when the footage went viral:

I've always been teased about my over-enthusiasm,but…It was a blue whale! Live! A special & important moment #bigbluelive @BBCBigBlueLive

“It was a blue whale!” is, most certainly, all the justification he needs for that excitement. That’s not something you see every day—or even every decade.