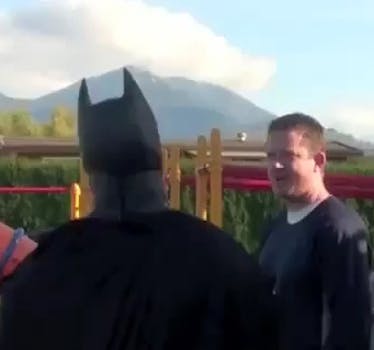 In a nod to Chris Hansen’s To Catch a Predator TV show, a Canadian trio of teenagers is trolling pedophiles and posting the results to YouTube.

Pedophiles have long been the subject of much trolling and Internet vigilantism. Now, a heroic new type of Web justice is starting to break out in the real world.

For the past couple of weeks, three male teenagers in Canada have been baiting pedophiles by posing as underage girls in online chatrooms. The trio then convinces the subjects to meet them in a public space, only to confront them dressed as either Batman or The Flash.

The group has been posting videos of the encounters to their YouTube channel BlueGenitalWarts, under the series name “To Troll a Predator,” a nod to Chris Hansen’s To Catch a Predator TV show.

In the group’s latest installment, filmed in a McDonald’s, The Flash loudly tells nearby customers, “This man’s a pedophile… he brought marijuana for a 15-year-old girl. He’s here to have sex with her.”

The videos have spiked online, thanks in no small part to traction on Reddit. Even the local police have taken notice. In fact, the trio’s YouTube was recently closed, due to an ongoing investigation by Canadian law enforcement.

That hasn’t stop fans, however, from uploading copies to YouTube.

“These are a repost so the work of these boys can live on” wrote the recently created user ToTrollAPredatorTV in the video’s description.  That YouTube channel currently has copies of most of the originals.

“Our main concern is personal safety issues for these children,” RCMP Cpl. Tammy Hollingsworth told the Canadian Broadcast network CTV.  Hollingsworth went on to explain the police “just wanted to make sure that they knew the ramifications” of humiliating adult men in public, and it is unclear if the teens will be charged—or if the men featured in the videos will be investigated.

Meanwhile, the trio’s Facebook page, which boasts 1,500 Likes, has become inundated with media requests, as well as supportive messages.

“Great job guys….it seems the warnings from the police were weak at best…few in Canada drive around with weapons in the car….even the weirdo pedophiles I assume, and you are only doing what the police should be doing” wrote Brock MacLean on Facebook.

“First of all, way to show the world that there are decent and active people out there willing to protect their communities from this sort of trash! I would also like to commend you for abiding by the police’s request that you stop for the multitude of reasons that make this dangerous for you and other children as they suggest” commented Jamie Traps Varga, who then went on to wonder if the trio could work with law enforcement in the future.

The trio originally agreed to an interview last week with the Daily Dot. They have since stopped responding to messages and could not be reached for comment.