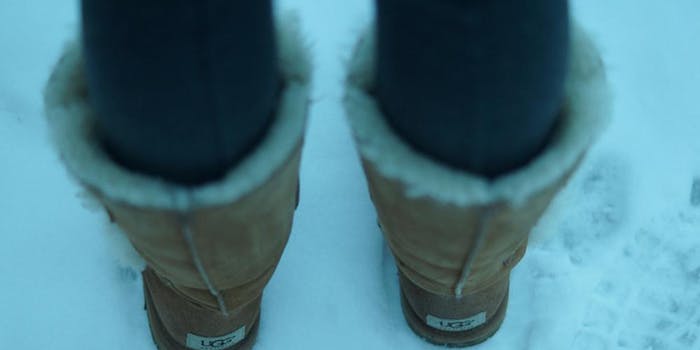 Basic Bitches of America, let's wear the term proudly on the sleeves of our North Faces.

I have come to an astonishing revelation. I am basic. I regularly wear jeggings. I own a pair of Uggs. (I mean, I haven’t worn them since seventh grade, but suffice it to say money between myself and some happy-go-lucky Aussie boot manufacturers has, at some point, changed hands.) I love brunch and musicals and Tory Burch, and there are photos of me riding a camel on Facebook from a Birthright trip. I have called margaritas “margs,” or even “margz.” I have made up the lyrics to the Sex and the City theme song. I have dressed as a sexy version of a character for Halloween (a Smurf) and I own not just one, but three hair straighteners. And you know what? I’ve tried a pumpkin spice latte once, and I thought it was fucking delicious.

I am a “Basic Bitch.” And that’s totally OK with me.

I was blissfully ignorant of my own “basicness” until earlier this week, when the term enjoyed a brief renaissance, thanks to a piece deconstructing the “Basic Bitch” trope in Bustle. In the piece, writer Aria Bendix reluctantly admitted to being a “Basic Bitch,” due to her love of skinny margaritas and Britney Spears karaoke songs but maintained she “didn’t like [the term”] one bit,” arguing that she can “love pumpkin spice lattes and still be extraordinary”:

Although I’ve enjoyed Bustle’s (and various other publication’s) many light-hearted references to Basic Bitches, whose authors poke fun at themselves just as much as they tease other people who are obsessed with selfies and going to brunch, I’ve failed to consider the seriousness that these two little words can carry. They take things that women enjoy, like drinking a frappuccino or sending funny GIFs when we’re bored, and turn them into qualities that diminish our standing as unique individuals.

While I was familiar with the term “Basic Bitch” prior to reading Bendix’s piece—back in April, when the term first came to cultural prominence, I’d enlisted a pop culture-savvy colleague to explain it for me, which ultimately devolved into a conversational tailspin about cultural appropriation and whether Kreayshawn self-identified as an intersectional feminist—this time around I realized how similar her description of the Basic Bitch trope was to that of the Jewish American Princess (JAP): the spoiled, Ugg-sporting, yoga-loving, North Face-wearing young woman of Jewish-American lore.

If you were Jewish and went to summer camp in the United States, you have probably called someone else a JAP or been referred to as a JAP on more than one occasion; now, apparently, the term had been deemed politically incorrect, though the trope itself still lingered in the guise of Basic Bitchhood.

So this time around, I took a more subjective approach to the Basic Bitch, scanning Bendix’s description of basicness like a hypochondriac checking for symptoms of colon cancer on WebMD. A love of Britney Spears: check. Sending funny GIFs when I’m bored: Check. Even the inordinate love of brunch was spot-on, as I’d just gotten into an argument with my boyfriend over the now-infamous New York Times op-ed, which culminated with me calling him a “Commie pinko rat bastard” when he said he didn’t like mimosas. My love of brunch, one of the primary hallmarks of Basic Bitchdom, was apparently so intense that it caused me to temporarily metamorphose into Joe McCarthy.

But the second thing that I realized from reading Bendix’s piece is how rabidly self-defensive she was about being called “basic,” as if she, too, were being called a Commie pinko rat bastard. “Despite what the media may tell me, it is possible for me to love apple picking and pumpkin spice lattes and still remain the distinct, multi-faceted human being that I believe myself to be,” she wrote. “As my fellow warrior Emma Watson tells us, it’s time to take control of the conversation, and stop letting society define us.”

Putting the obvious basicness of citing Emma Watson as a paragon of feminist rhetoric aside, it was as if to Bendix, accusing her of being Basic wasn’t just an indictment of her lack of imagination or her love of caffeinated sugary beverages. It was nothing less than an indictment of her entire person.

To me, this seems absolutely ridiculous, for a few reasons. For starters, when you look at the symptoms of basicness in aggregate—a love of skinny margaritas, PSLs, and David Yurman jewelry—it’s really not so much an indictment of your character as it is an indictment of the shit you buy. As Noreen Malone put it in her fantastic deconstruction of the “Basic Bitch” for New York magazine, the Basic Bitch is not only an inherently sexist term, because she is defined by her “[delight] in all things men dismiss as unserious,” it’s a critique of consumer-driven culture as well:

It seems to me that while what [the term ‘Basic Bitch’] pretends to criticize is unoriginality of thought and action, most of what basic actually seeks to dismiss is consumption patterns—what you watch, what you drink, what you wear, and what you buy—without dismissing consumption itself. The basic girl’s sin isn’t liking to shop, it’s cluelessly lusting after the wrong brands, the ones that announce themselves loudly and have shareholders they need to satisfy. (The right brands are much more expensive and subtle and, usually, privately owned.)

Put another way, the Basic Bitch’s chief offense is not being frivolous or unimaginative or even outright stupid. It’s wearing J.Crew flats instead of vintage mules, or Urban Outfitters instead of, oh, this old thing, it’s just a poncho knitted by a Hopi tribesman that I got off Etsy. To be a Basic Bitch is to fall short of a hipster aesthetic that is both totally arbitrary (who says that vintage poncho is actually cuter than the one from Urban Outfitters?) and totally elitist (women who can afford to buy such garments, that’s who).

When you acknowledge the class implications of basicness for what they are, it seems ridiculous to get apoplectic or defensive over being called a Basic Bitch. All the person calling you basic is saying is, “Your shoes are not as expensive as mine, so you are probably of a lower socio-economic level than I am, and I am a hoity-toity hipster garbage human.”

The other thing about being a Basic Bitch is that because it is so strictly defined by female consumption patterns, the symptoms of basicness are vague and general, and can apply to pretty much anyone. If you look at the 119 items on the BuzzFeed quiz for “Are You Basic?,” for instance, a good 90 percent of them are phrased vaguely enough so anyone can identify with them, the same way psychics make amorphous, general statements about people’s dead relatives in the hopes that the audience will think they’re specifically talking to them.

Take No. 97: “You love Starbucks.” Most major metropolitan areas have a Starbucks on every corner, so if you drink coffee you probably have, at the very least, a strong emotional attachment to Starbucks. Or No. 33: “You love Taylor Swift.” Taylor Swift has sold more than 30 million albums worldwide, so there are theoretically at least 30 million people to whom this statement could apply. And don’t even get me started on No. 17: “You LOVE brunch.” In true Basic Bitch fashion, I will defend my take on this until the day I die. If you don’t love brunch (i.e., the act of drinking fruity booze and eating eggs with onions and possibly a side of breakfast meat on a leisurely Sunday afternoon), you are probably a Commie pinko rat bastard.

The argument has been made that the Basic Bitch is the polar opposite of the Cool Girl, the trope described in Gillian Flynn’s Gone Girl that describes a “hot, brilliant, funny woman who adores football, poker, dirty jokes, and burping.” In the sense that the Basic Bitch loves stereotypically female things—skinny margz, Pinterest, Uggs, and the like—and the Cool Girl loves stereotypically male things, this is somewhat true. But seeing as I identify strongly with both tropes, I think that speaks to how vague and generalized the criteria for basicness is.

If we’re going to base an entire female stereotype on a set of arbitrary tastes and preferences, we should probably make sure they’re not quite so arbitrary as to apply to anyone who likes drinking booze at noon and dancing till four in the morning and wearing inexpensive pretty clothes and texting silly things to their friends and trying to live a life that is not totally devoid of light and silliness and joy and fun. That, in essence, is what being a Basic Bitch means to me: Not caring what media taste-makers have to say about your choice in footwear, not giving a shit if someone makes fun of you for citing Emma Watson as a figurehead for feminist theory, not living in fear that your love of Taylor Swift will lose you Twitter followers, and just generally living like there is nothing to fear in the world at all (except, maybe, for carbs).

Which is why, as someone who has spent most of my life fearing most things, I won’t run away from the term Basic Bitch as Bendix does; I’ll wear the term loudly and proudly, like a badge on the sleeve of my North Face. Because I am not extraordinary in spite of my love of margz and brunch and SATC and sure, fine, pumpkin spice lattes. I am extraordinary because of it.