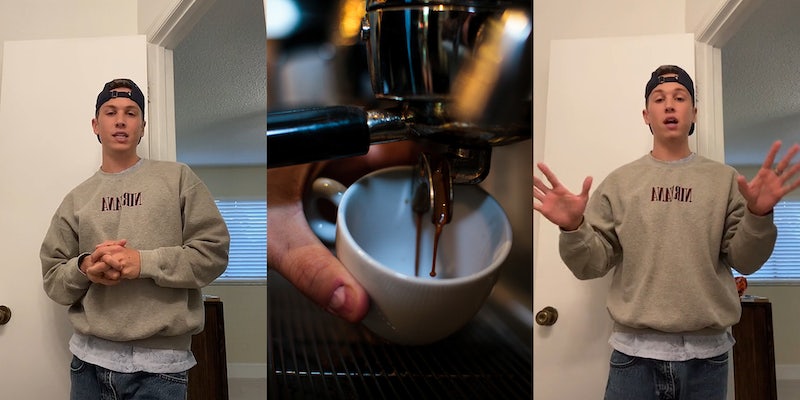 ‘This isn’t Starbucks. You don’t just press a button and the coffee comes out’: Worker shares poor job interview with local coffee shop

'How am I supposed to get the experience if you don’t hire me for the position?'

The debate between the quality of Starbucks and local coffee shop coffee has been going on for years. From technique to specially-roasted beans, baristas take pride in a good cup of joe.

In a viral video, TikToker Brady Hoffman (@bradyhoffman313) shared his experience with a barista who clearly has a strong opinion on the debate.

“This isn’t Starbucks. You don’t just press a button and the coffee comes out,” the barista told Hoffman.

Catch me at your local coffee shop slinging espresso

Hoffman explains that he had a job interview with a local coffee shop and that it went “extremely well.” Hw then reveals he was joking.

“Catch me at your local coffee shop slinging espresso,” the caption said.

During the call, the interviewer asked Hoffman if he had worked in a coffee shop before. He hasn’t, but he instead listed his past experience in other jobs, including work on horse farms, landscaping, and as a dental assistant. Hoffman applied because he needed some extra cash and has experience in fast-paced environments.

The interviewer allegedly told Hoffman that “baristas are the equivalent of chefs.”

“Be fucking for real,” Hoffman says. “No shade to baristas but be f*cking for real… I was like, ‘I do know how to load an espresso puck and brew espresso.’”

At this point, the conversation took a turn when the interviewer told Hoffman that the coffee shop wasn’t Starbucks—as if that were an easier job. Hoffman says he didn’t appreciate the attitude of the barista.

“That’s when I like flipped and I said ‘it’s coffee! It’s fucking coffee!’” he snaps. “I make mixed drinks to go out to the club that are way more complicated than a fucking latte.”

The interviewer then told Hoffman it wasn’t going to work out, and he agreed before hanging up the phone.

In the comments section, viewers agreed with Hoffman and shared their feelings on the job market.

“No bffr bc I was a barista for like 8 months and trust me they aren’t like chefs like no shade it’s hard to learn but not that deep,” one user commented.

“‘Baristas are the equivalent of chefs’ oof interesting take,” another said.

“Literally like there’s ‘all these jobs hiring’ yet nobody will actually hire you,” a third user commented.

The Daily Dot reached out to Hoffman via Instagram direct message.