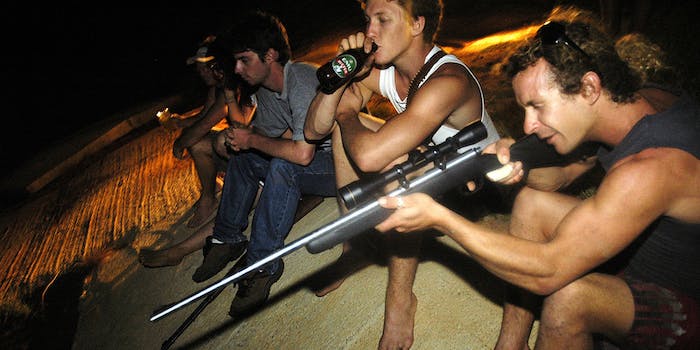 Why we should ban guns on college campuses

Have we learned nothing since Elliot Rodger?

In many parts of the United States, there are fewer and fewer places one cannot enter with a firearm. Forty two out of 50 states must issue a concealed carry license to any citizen who asks for one, barring any previous felonies or noted mental health problems. You can carry a gun into a movie theater, into a bank, even into a bar in many states. So it’s no wonder guns rights activists are clamoring to be allowed to carry a deadly weapon into college campuses.

While seven states already allow public university students and staff to carry a gun, 11 more are expected to introduce such bills to their state legislatures this year. A bill in Texas found overwhelming support in the state Senate—and is expected to sail through the house—and a proposal in Florida meets with the state Judiciary Committee next week, which is the final step before legislative voting. To justify the law, one National Rifle Association lobbyist in Florida called college campuses “unsafe” danger zones “where murderers and rapists may commit their crimes without fear of being harmed by their victim.”

This argument is an old chestnut of pro-gun activists. Who could forget the immortal words of National Rifle Association President Wayne LaPierre and his stance on “Good Guys With Guns v. Bad Guys With Guns?”

Unfortunately for the NRA and activists working to pass these laws, however, the world is a far more complex place typically free of such black-and-white thinking. College campuses are perhaps the last place anyone should be allowed to carry a weapon, let alone students. Most of the risk factors that contribute to gun crime are found in abundance at college campuses. A year after Elliot Rodger gunned down three female students at a University of California, Santa Barbara sorority house during a killing spree where he took the lives of four other men, social media has shined a light on the culture of racism, sexism, and sexual assault on America’s college campuses. Throwing firearms into this mix will only make the problem worse, arming the Elliot Rodgers of the future.

Many gun debates center on detailed yet contradictory accounts of what causes gun crime. Is it mental illness? Poverty? Gang-related violence? But the one factor that undeniably contributes to gun violence is also the most obvious: guns. Wherever there are more firearms, people are more likely to die from gun violence. While studies continually back up this statement, it should be mere logic that could tell anyone the dangers gun ownership can pose. Owning a gun makes you more likely to die from a gun in the same way owning a car makes you more likely to die in a car accident. While training and security measures can go a long way towards reducing risks, sometimes shit just happens.

And such events are more likely to happen when drugs and alcohol are present. According to numerous studies by the Center for Disease Control, one third of all gun-related crimes involved alcohol and 60 percent of gunshot victims were “acutely intoxicated” at the time of their death. This is a major issue when paired with the correlation between gun ownership and alcohol abuse, as gun owners are twice as likely to abuse alcohol on a regular basis. Those who admitted to carrying a loaded weapon with them—or simply loaded but not locked around their home—were also more likely to binge drink and drive while intoxicated.

This should be very concerning news considering the effect alcohol has on the brain, impairing good judgement and increasing risks for mental illness. According to numbers collected by the National Institute of Health, 86 percent of homicides are committed by someone using alcohol and 42 percent of all violent crimes are associated with alcohol abuse. This is especially true of college students: Over 690,000 students will be assaulted this year by a drunk person, and 97,000 of those persons will be sexually assaulted.

Combining these two at-risk communities—gun owners and college students—will make no one safer. The Campaign To Keep Guns Off Campus, a nonprofit devoted to collecting pledges from college presidents to keep their campuses gun-free, released the results of a survey that observed when guns were allowed on college campuses saw there were no distinct decreases in crimes overall, including rape and murder. While that does not prove guns cause violent crime, it does disprove attempts by the NRA and Republican lawmakers to show that guns will make people distinctly safer.

This idea of the armed vigilante fighting off the madman mass shooter or of an armed co-ed fighting off possible rapists with a handgun also relies on the major fiction that such events are a common occurrence for gun owners. “The one thing a violent rapist deserves is to face a good woman with a gun,” advocates LaPierre. Such justice porn is not unknown—estimates of such defensive gun uses range from only 108,000 incidents per year to the lofty assessment of 3 million—but studies by the Center for Disease Control cite the desperate need for more research. That ideal is heavily outweighed by the increase risk guns bring with them wherever they go even for their owners; according to a 2009 study, owning a gun makes you 4.5 times more likely to be the victim of a violent crime.

While the logic of gun ownership as a solution to the problems facing America’s universities is alluring, guns aren’t here to save us. Widely circulated statistics suggest that 1 in 5 female students will be sexually assaulted on campus, and while that figure has often been called into question, its widespread acceptance is indicative of just how grave the issue is. Instead of forcing students to be responsible for the lack of safety and accountability on their own campuses, it’s time to force colleges to step up.

We need to ensure that colleges are a sanctuary untainted by gun violence. The cost of doing anything else is simply too high.