Bang With Professionals: How LinkedIn can get you laid

Bang With Professionals combines business and hookups in one efficient app.

Welcome to the only online hookup network that won’t let you lie about your job.

Bang with Professionals, the first website to actually use the business-oriented social network LinkedIn as a facility to get you laid, arrived over the weekend with the force of a thousand swords. Think Blendr. Think Grindr. Think Bang with Friends. Think pencil skirts. Think power ties.

The whole operation is alarmingly simple. You connect with the network through your LinkedIn account, then use that connection to cycle through the profile photos of your contacts. You scroll down. You click “Would bang” on the button that asks you if you “Would Bang?” under each name. When you click on someone, their status turns to “Down for it.”

Then you wait and hope that your contact decides to join the site and click “Would Bang” on the button under your name. Should that happen, you’ll both get an email notification.

“We let you work it out from there,” the site explains with a wink.

According to the site’s Tumblr page, “the whole idea kinda started as a joke. 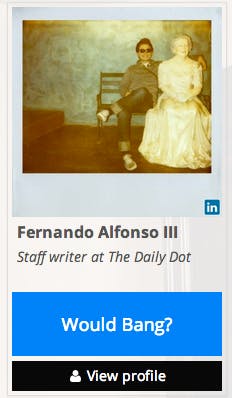 “We obviously saw what others were doing,” the site’s anonymous founders said in reference to communities like Grindr and Blendr, “but it was hard for us to think of really hooking up with someone using their services. In our opinion a network such as LinkedIn might be a good place to look when trying to hook up with someone. After all, you spend most of your time at work, so chances are finding someone to hook up with used on your LinkedIn profile might be a good place to start.”

Or, in other words, great minds think alike. You’re most likely to be attracted to someone who seeks the same opportunities in life.

We’ve reached out to these young socialites for some background figures and information, but they told us they prefer to remain anonymous until the hype around Bang With Professionals dies down.

According to the site’s Twitter feed, BWP traffic has already jumped 400 percent—so they’ve got something like four people on the site!

Let’s hope they all wanna bang.