Robert Wayne Gladden, Jr., a Baltimore-area 15-year-old who allegedly shot a classmate in the back before being tackled by school staff, was charged with attempted murder and assault this morning. But while journalists were working to confirm the shooter’s identity yesterday, internet sleuths had already found his Facebook profile—and his eerie last status update, which has been shared over 950 times.

“First day of school, last day of my life. t(~_~t), fuck the world,” Gladden wrote at 6:30am on Monday. As Buzzfeed points out, Gladden’s name was being thrown around on Twitter by students at Perry High, where he’d apparently planned to end his life in a mass shooting, within a few hours of the shootings. People looked up his Facebook profile, and the haunting status update, just as quickly—and since Gladden’s privacy settings allow users who aren’t his Facebook friends to reproduce his content, they began to share the update.

It’s a funny way to deal with, and respond to, the shooting. It’s not just his status update, either. Gladden’s self-portraits, in which he hides behind his long hair, are being shared as evidence of instability: “Kids like this run from. He just shot a kid in Perry Hall high.” (To me, he looks like your standard Skrillex-listening mall-goth.)

The status update isn’t being passed around as should’ve-seen-it-coming evidence, though. Many people sharing it are unsympathetic or threatening: “I hope bubba gets ahold of this emo punk ass bitch hope they send your ass to d.o.c fag boy,” one person wrote. Others express some kind of sadness or empathy, or warn parents to look out for their kids. Mostly it’s just passed along with only the slightest of context, though: an odd, tragic moment, linkable and shareable.

Meanwhile, Daniel Borowy, the kid Gladden allegedly shot, is said to be in critical condition. Students at Perry Hall returned to classes today. 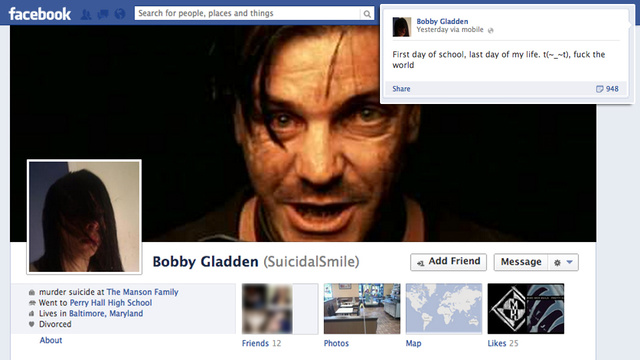