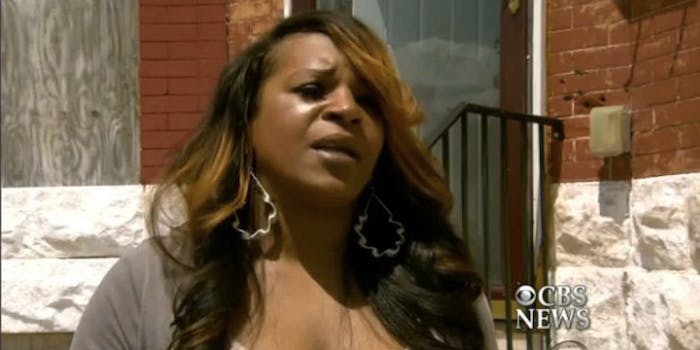 Now this is good parenting.

The lasting image from Baltimore this week is not a flaming CVS, a little boy offering bottles of water to a line of heavily armed police officers, or a foul ball plunking into empty stands at Camden Yards. No, the image that has been playing repeatedly on national news channels is that of a Baltimore woman slapping and yelling at her son, a ski mask-wearing teenager who allegedly partook in the riots that broke out Monday afternoon before his mother tracked him down.

The “Hero Mom,” Toya Graham, has become a symbol of parenting done right—she even earned some laudatory praise from Baltimore Police Commissioner Anthony Batts. “I wish I had more parents who took charge of their kids tonight,” Batts said hours after the video went viral, holding Graham up as an exemplary mother.

But what we’re not talking about when we talk about Toya Graham is the real conversation to be had. Graham is just one of millions of black moms out there who are not “embarrassed” by their kids, as Batts said in his news conference praising Graham, but fearful of their safety in heavily policed areas.

And while Graham may be considered, by our national media, a good mother for ripping her son’s ski mask off his head, her experience is not necessarily the narrative some people are pushing.

In an interview with CBS News on Wednesday, Graham, who’s a single mother of six children, explained her side of the story:

He [her son] gave me eye contact. And at that point, you know, not even thinking about cameras or anything like that. That’s my only son and at the end of the day I don’t want him to be a Freddie Gray. … At that point, I just lost it. I was shocked, I was angry, because you never want to see your child out there doing that.

Since the shooting death of 18-year-old Michael Brown in Ferguson, Mo., last summer, a spotlight has been cast on black mothers raising sons in turbulent areas. Although Graham said she doesn’t condone the riots or any of the violence that has sparked in her city following Gray’s death, it’s clear that she is also just tired—of the violence, the chaos, and how it all sparked in the first place.

“There’s some days that I’ll shield him in the house just so he won’t go outside and I know that I can’t do that for the rest of my life,” Graham told CBS News. “I’m a no-tolerant mother. Everybody that knows me, know I don’t play that.”

Graham’s frustration over not just her son rioting, but interacting with police officers in riot gear swarming in on Baltimore’s Mondawmin Mall, echoes the raw interview Brown’s mother, Lesley McSpadden, gave to the website NewsOne shortly after her son was shot multiple times by a white police officer.

McSpadden said at the time:

Do you know how hard it was for me to get him to stay in school and graduate? You know how many black men graduate? Not many. Because you bring them down to this type of level, where they feel like they don’t got nothing to live for anyway. … “They’re going to try to take me out anyway.”

There’s a spotlight on black mothers in America right now, but let’s make sure we’re not missing the subtext in the shadows: Graham should be praised for giving her son what she called a “teachable moment,” but she also should be hailed as a mother fighting for her right to parent her child. As Katherine Cross wrote in RH Reality Check last August, “If reproductive choice is about deciding whether or not one can have a family, or how large one wants her family to be, then structural violence imposed on a community is a constraint upon that freedom.”

Our “Hero Mom” is not a hero because she’s stopping her son from being—Fox News’ code word—a “thug.” But she is, perhaps, a true example of the struggle for reproductive justice and parental rights in America: a parent who is plain fed up with the injustice.

Lauren Barbato is a freelance writer of all styles based in Los Angeles. She has written about arts and entertainment for numerous print and online publications, including Bustle, Yahoo! Movies, FILTER, MovieMaker Magazine, Under the Radar, and Campus Circle.