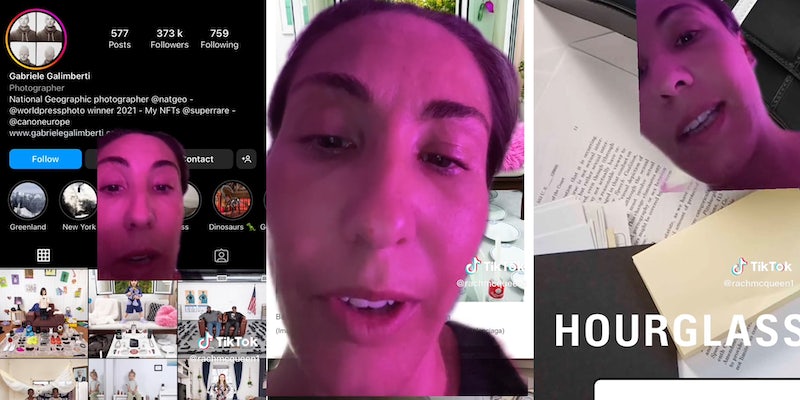 'The intention behind these images is clear.'

Rach McQueen (@rachmcqueen1), who has nearly 10,000 followers, is known for posting celebrity and entertainment news recaps on TikTok. On Monday, she posted a video breaking down the Balenciaga advertisement, which she says looks “exactly” like child pornography or fetish content.

Gabriele Galimberti, a well-known Italian photographer, shot the Objects campaign as part of Toy Stories, his two-year project in which he created colorful images of children in their homes with their toys.

McQueen, the TikToker, says the photos seemed more “crazy” when she dug a little deeper. In her video, she shares a screenshot of an image on the Balenciaga website’s home page. The image is seemingly harmless, picturing a small handbag on top of a pile of papers and folders. McQueen says when she zoomed in on the documents in the photo, she noticed words and phrases like “speech coalition,” “sexual intercourse,” “pornography” and “sex.”

“Obviously, when we tie that document to these images [of the children] it becomes even more disturbing,” McQueen says.

McQueen claims that the documents seen in the photo came from Ashcroft v. Free Speech Coalition, a court case arguing that images that don’t actually depict child pornography — but only imply it — should be legal.

In her video, McQueen also recalls that Balenciaga announced in 2019 that they would no longer be hiring models under the age of 18 for their campaigns. The fact that the company is now using these child models for its Objects campaign means one of two things, according to the TikToker. Either Balenciaga didn’t “hire” the child models — meaning they’re being exploited — or the company completely went back on their plans from 2019, she says.

McQueen says she noticed weird similarities between the Objects advertisements that use child models versus adult models. In the child photos, their teddy bears have piercings that look the same as the ones adult models have, she says. In other photos with the child models, you can see keys on the table — and adult models are holding the same keys in their photos.

“There are a lot of things that tie in and a lot of weird objects that are featured in here given the context of everything that I have just spoken about,” McQueen says.

Since backlash about the photos arose, Balenciaga deleted all the posts from its Instagram account. It is unclear whether the company deleted the posts in response to the backlash or for an unrelated reason. On Monday, Balenciaga made 10 new posts featuring its Spring 23 campaign.

“This raises big questions about Galimberti and his Toy Stories series and Balenciaga and the possible child exploitation that they are involved in and/or supporting,” McQueen says. “Also, Balenciaga are you trying to tell us that this is implied child pornography? That this is like fetish content? Because that’s kind of exactly what it looks like.”

Some commenters said the campaign was clearly a problem, and some specifically called out Galimberti as the photographer behind the campaign.

“Photography is no accident. Everything is selected, positioned, presented for a purpose in every scene. The intention behind these images is clear,” one viewer commented.

“I study photography and EVERYTHING is planned in advance like weeks before even taking a photo that was no accident,” a second commented.

A third wrote, “It’s not ok. That photographer should be ashamed.”

On Instagram, Galimberti garnered a number of negative comments under his most recent post, which shared one of his photos from the Balenciaga campaign.

Galimberti captioned the post, “This is Juno, 3 years old. Another of the little girls I photographed for @balenciaga as part of my Toy Stories project. It was really fun working with you guys @demnagram @hell0nie #toystories #kid #play #balenciaga.”

“This isn’t something to be proud of,” another user wrote.

On TikTok, some users called out Balenciaga.

“Now how did they think that was good socially acceptable idea,” one user said.

“There is no way so many people didn’t seem to see anything wrong with this,” another user wrote.

The Daily Dot reached out to McQueen via TikTok comment and to Galimberti and Kering, the company that owns Balenciaga, via email.

Balenciaga addressed the controversy in a statement released on the brand’s Instagram story.

“We apologize for displaying unsettling documents in our campaign,” the statement reads. “We take this matter very seriously and are taking legal action against the parties responsible for creating the set and including unapproved items for our Spring 23 campaign photoshoot. We strongly condemn abuse of children in any form. We stand for children safety and well-being.”

Additionally, in an email to the Daily Dot, Galimberti did not comment on Balenciaga’s choices but stressed that as the photographer, he did not have a hand in the direction of the shoot.

“I was not entitled in whatsoever manner to neither chose the products, nor the models, nor the combination of the same,” he said. “As the photographer, I was only and solely requested to lit the given scene, and take the shots according to my signature style. As usual, the direction of the campaign and of the shooting are not on the hands of the photographer.”

He also stated that he has no connection to the image that features a Supreme Court document.

“That one was taken in another set by other people and was falsely associated with my photos,” he wrote.