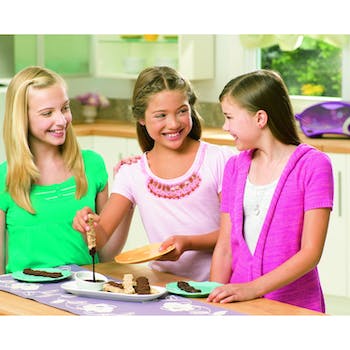 Baking up a batch of politics

Food writer Jason Kessler on the Easy Bake oven color kerfuffle and the Internet cause.

December is the month for boozy holiday parties, too much family time, and spending a large portion of your yearly income on presents. For kids, it’s less complicated. They don’t care much about holiday parties or family time, but they do care about presents. A lot. To them, Christmas time has more to do with Black Friday than Good Friday. While “Tickle Me Elmo” (now known as “Tickle Me If You Want a Lawsuit Elmo”), Furbies, and Cabbage Patch dolls made headlines in their respective years of hotness, there’s an old-school yet still very hot toy (literally) that’s getting some new attention. It’s all thanks to a 13-year-old New Jersey girl and her campaign to convince Hasbro to make an Easy-Bake Oven that appeals to both girls and boys.

There are more significant issues at play here beyond lightbulb-cooked brownies. What started as a YouTube video and a change.org petition has evolved into a full-on Internet cause. Big time chefs like Bobby Flay and Laurent Tourondel have jumped in with their support and more than 40,000 people have signed the online petition. The quest for a gender-neutral toy oven has been given an air of legitimacy that goes well beyond tiny plastic kitchens in our nation’s playrooms. There’s something in the air now, and it smells a lot like pre-packaged brownie mix with a swirl of politics.

Let’s face it, the Internet loves a cause. Kony 2012, Betty White hosting SNL, Kickstarter campaigns galore—it’s all part of the “do-gooder” ethos that has defined various parts of the Internet for years. Groupon was started as a crowd-sourced fundraising portal for all sorts of causes before it morphed into the world’s largest distributor of car wash discounts. As a cause, this isn’t that much different from the rest, except it comes from a human who has probably never heard the sweet sounds of a dial-up modem. Of course McKenna Pope made a YouTube video to get the word out. If a Korean pop star can get his message of bow ties and horse-dancing out to the world, so can she.

The cause itself is interesting. This isn’t about some world-changing malfeasance. It’s about a toy. Sure, it’s about gender stereotypes and accepted roles and all sorts of topics that would fill a Gender Studies 214 course at universities everywhere, but in the end we’re talking about a toy. One that can be played with by boys AND girls, no matter what color it is or who’s on the packaging. What young McKenna is asking for is really much bigger than she realizes. She doesn’t just want different colors of the Easy-Bake Oven so it’ll appeal to both genders. She wants Hasbro to re-define her own gender paradigm. 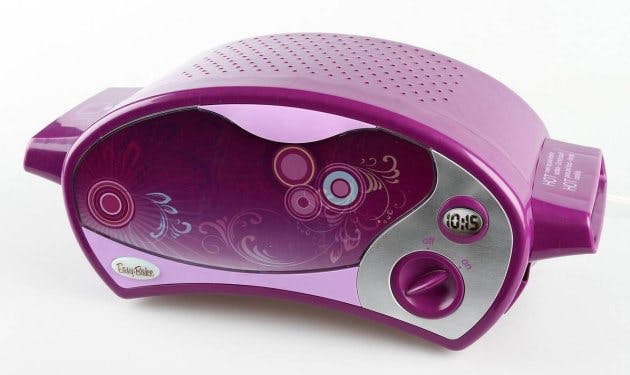 Just about everyone who has publicly weighed in on the issue seems to accept that purple and pink signify female, and that somehow a stainless steel version would instantly make it manly. What if the problem isn’t that Hasbro has chosen purple as the color for their toy? What if the problem is that we still live in a culture where certain colors mean certain sexualities and gender identities? It seems like we bump up against this every year now. One year it’s a girl who gets teased for her love of Star Wars, the next it’s about LEGOs for ladies. Each new gender-via-toy flare-up raises the same question: Is it a toymaker’s responsibility to disrupt their customer’s thinking in order to attack the problem at the root? No. It most certainly is not.

Hasbro wants to sell miniature ovens that cook things using the heat of a lightbulb. They know that their audience is typically female (thanks, I assume, to exhaustive market research) and they know that a lot of girls respond well to the color purple. Trust me when I say they’re just in this for the money, people. The only color they care about is green. If a stainless steel Easy-Bake Oven would sell as well or better than a purple one, you would never see a purple one on the shelves. Hasbro cares about the bottom line.

Young teenage activists, on the other hand, care about gender roles. My advice to McKenna Pope? Instead of asking for a new color that strips the toy of whatever gender associations you have in your head, teach your little brother that purple and pink don’t have to be “girl colors.”

Thanks to the Internet, anything can be a cause these days. The unfortunate part is that when you crowdsource outrage, it’s easy to lose sight of how much an issue really matters in the real world. Will anyone lose sleep if the color doesn’t get changed on a toy oven? No. Of course not. Yet people are spending time thinking about the color of Easy Bake ovens when there are far bigger things to worry about: a drawn-out civil war in the Middle East, massive destruction thanks to natural disasters, a renewed debate about the role of guns in advanced society.

The list goes on and on and here we are arguing about colors. Well, McKenna, I hope you’re happy. Hasbro just announced that they’re caving in to your demands. In the future, perhaps you and the rest of the people who bullied Hasbro to be more gender-neutral should take a step back and question why you’re fighting so hard to give credence to the idea that colors equate to gender in the first place. After all, programmers don’t even think of purple as a color. It’s just #800080.

Photographs via Amazon and Yahoo.