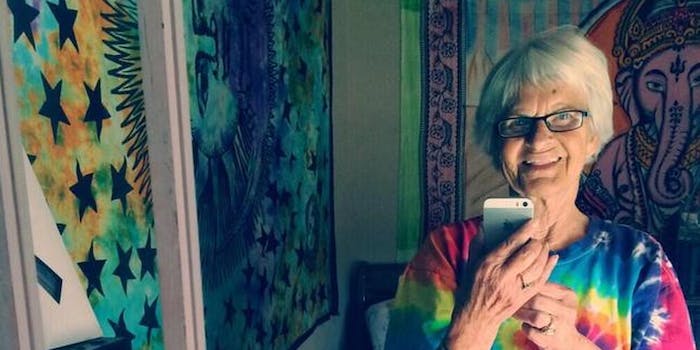 Baddie Winkle flipped the script on what it means to be popular in your twilight years.

Twitter celebrities come and go, but Baddie Winkle just flipped the script on what it means to be Twitter famous in your twilight years.

The 86-year-old has captured our imagination since joining Twitter in early April. She’s got the selfie down, has impeccable style, and like all recently viral 80-somethings, really wants to be on The Ellen DeGeneres Show.

Is this account clever promotion for Johnny Knoxville’s Bad Grandpa followup? Is Baddie actually a teen in disguise? Does she really know what “basic” and “turnt” mean? A Vine user named Kennedy has a collection of Baddie Winkle videos, and gets a shoutout as Baddie’s “fav great grandchild” on Twitter, so it’s very possible she’s being eased into Internet fame by her teenage great-granddaughter. In this clip, that might be her barking “Twerk!” at her granny.

Is it cruel? Humiliating? Baddie seems to be enjoying her fame, and at age 86, why the heck not. If this is some viral teen construct, complete with merchandise, it sort of makes sense. Teens are the new capitalists.

on my way to steal your man pic.twitter.com/ZK0KmYJLbw

It’s been a great day for badass old ladies.