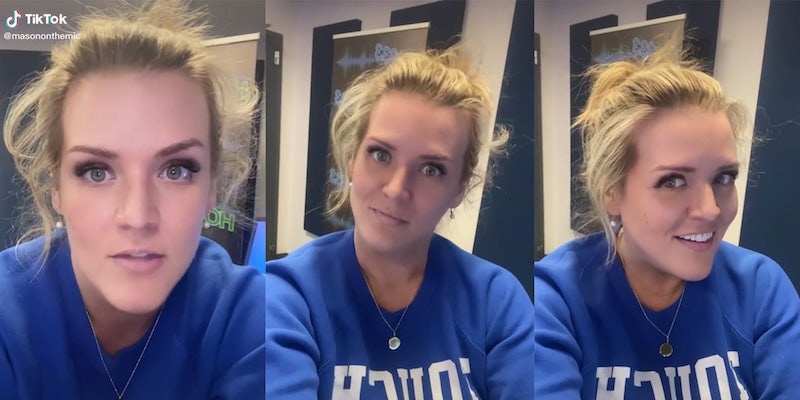 ‘A walking red flag’: Woman shares alarming voicemails from date who stood her up

Yes, his mom got involved.

Dating is bad right now, but what’s happening to one Dallas radio host is truly a nightmare.

According to her initial TikTok, which now has more than 5 million views, Mason (she prefers just a first name) explains she had a first date planned for last Friday night. But after waiting for her date for 30 minutes at a restaurant, she realized she’d been stood up.

The man later called to say his father was in the hospital, then called again to say that was a lie, then left her an increasingly concerning series of voicemails.

In subsequent voicemails, the man gets angrier. Perhaps sensing what’s coming, he demands that she not put the voicemails on TikTok, and even threatens legal action.

Then the man’s mother apparently got involved in leaving voicemails, which Mason played on-air Tuesday morning. The mother invited her over to dinner so that Mason could “see that she raised a good boy.” On TikTok, she weighed whether she needed a restraining order, and said she bought pepper spray.

It certainly makes for engaging content; she solicited similar bad-date stories from listeners, and often posts dating anecdotes on her social media. Her TikTok followers are very invested. “This is my new favorite show,” said one.

But this escalation prompted others to warn her to keep her guard up. “I don’t think you could put more red flags in one voicemail if you tried,” said another commenter. After the TikToks were posted to Twitter on Monday, people commiserated over how bad dating has gotten, but also pointed out this red-flag behavior.

Update Sept. 16, 1:30pm CT: This article has been updated to include the TikToks of the mother’s voicemails.