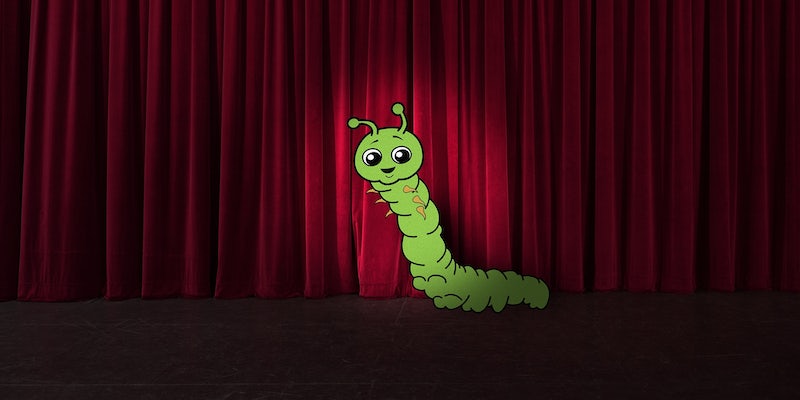 Straight from the bug itself.

To tell the story of “Baby’s names” is to untangle an entire ecosystem of insects warped that evolved in a parallel universe and finally became memes. The Facebook page—which once took expectant, unwitting parents for a ride by suggesting monikers like Theatre Squid and Congratulations, It’s A Backstreet Boy for their progeny—jettisoned away from strictly naming children and has delved into crafting a larger-than-life myth.

First, the basics: Baby’s names is controlled by a green, anthropomorphic, caterpillar-esque creature known as Buge. Naming children is essentially Buge’s raison d’être. It’s also what’s caused incredible strife in Buge’s life. The insect has been “captured” multiple times by its Auntie Kayla, who tends to take a mercurial approach toward Buge’s unconventional naming tactics. It has also faced another nemesis, known as Chaos Buge, who appears yearly and has crafted its own dimension to contend with all the good Buge’s activities on this plane of existence.

Secondly, the admins behind the Facebook page aren’t quite ready to pull back the curtain on a project that’s transcended its medium and may very well reach whole new creative heights. Instead, they’ve chosen to slightly bend the proverbial fourth wall and offer up Buge’s perspective on the controversies it’s currently enmeshed in.

I spoke with Buge over the course of a Facebook sticker-filled exchange that spanned the basics, the banal, and what it means to name babies for humanity’s betterment.

Tell me a bit about your upbringing. Are your parents close to Auntie Kayla?

Fortunately, my species does not have parents which is how we avoid naming disasters as such in this world. Auntie Kayla tried to convince me I was in her family but she is just really a desperate despot who wants to stop my naming ways and will use all sorts of trickery to uphold the centuries of naming oppression. For a while when she first took over my baby naming operations, I was actually brainwashed into believing I was her nephew so I felt obliged to cede to her authority. I still have nightmares of that time when I watched in a subdued state of mind as she sabotaged my important work.

Where do you live and where does Auntie Kayla live?

I travel often but my original home is a state of the art Insect Compound in the CyberInsect City of the Buge Dimensional Sector equipped with the latest in naming technology. As for Auntie Kayla she lives in a Tiny House that she built with plans she got off Pinterest. I think the cramped quarters she lives in probably contribute to her animosity towards me.

I’d hate to broach the subject of religion but I’m incredibly curious about where you align yourself and what Buge the deity means to you. Are you one and the same being, or is that your higher power?

The Insect Civilization has more of an abstract philosophical tradition that resembles a religion. The Elder Buges select certain buges after they hatch (like me) to become Baby Namers but beneath the symbolic nature of our names is a thought that these names create a type of reality using Buge Magic. The mission of our work is to give names that will allow babies to realize their full potential and thus recognize their True Identity, names such as Devon or Dennis only conceal our inner nature and prolong suffering. The closest thing we have to an idol is an ambiguous Ancestral Buge that represents the beginning of our civilization. We have a few festivals where it is customary to elicit atavistic visions of the Ancestral Buge.

Take me through your most recent escape from Auntie Kayla. How was she able to recapture you? And what did you do to break free?

I was lead to believe via e-mail that a deposed royal family was in need of my services to rename their lineage so I was contracted out to meet with them and provide better names for their babies. But when I went to the meeting place in a park, I was ambushed by Auntie Kayla with a big capturing net and placed inside an iron bird cage. I lost track of the days. It felt like months had come by in darkness as Auntie Kayla taunted me and threatened to delete my online baby naming business. Luckily, I kept a tiny tablet hidden inside my thorax, where I sent out messages urging my followers to start a social media campaign.

It started to become apparent that everyone thought it was a joke and since it failed to pick up traction as a cause of injustice ( I expected to see some kind of hashtag like #Free Buge2016FromAuntieKayla) I knew I had to craft my own escape plan. I was able to slow down my body slime to a rate that made it appear as if I was dead. Auntie Kayla thought I was dead so she threw me in the trash and I waited until the trash collector came to revive myself. I explained the situation to the Trash Collector and they agreed to rescue me. I got behind the wheel of the Dumpster Truck and honk the horn so Auntie Kayla would see me as I peeled off. She came outside and stomped her foot so hard, lole she was really mad!

How often has Chaos Buge appeared? Would you consider Chaos Buge to be you on a bad day or a whole other Buge entirely?

Chaos Buge appears like clockwork on Halloween every year, although recently their power during that time has grown and I fear they may be able to break through into this world more as their power has grown immensely in the Chaos Dimension he exists in. They are my oldest enemy and our story is very tragic. When we were children we were good friends, best Buge buddies for life in fact.

We were both cohorts in the Naming Academy. We used to speak of all the good we would do as we traveled through time and space giving babies proper names. Everything changed when the time came for the initiation test every naming Buge goes through before their training is complete. A crown is placed on our heads that channels the knowledge of the Naming Void into our minds. For me it was a transcendent moment of ecstasy, suddenly all that was to be known of names was made clear and I was one with the Eternal Name that expanded in every direction. For Chaos Buge, it was very different as their initiation sparked a dark catastrophe.

Chaos Buge started raving that names were used to control us. Chaos Buge declared allegiance to Disorder and Calamity right there, swearing to destroy all names and dismantle the Insect Civilization. The Elder Buges banished Chaos Buge to the Chaos Pit where only they exist in a nameless state except every time a baby is named something like Jennifer, Kyle, Luke, Matthew, Mark, John, Paul, George, or Ashley the dark energy of those names is concentrated in the Chaos Pit where it is used for their sinister plan to one day unleash the “NonName”. I suspect that Auntie Kayla herself is a beast generated by Chaos Buge’s power, a fighting arm of that tortured mind perhaps.

What compells you to name babies? How does it feel to have that kind of responsibility?

Naming babies is like an instinctual drive I must fulfill, like breathing. Every time I release a name into the world I am comforted by the fact that it will put into motion actions that will create a more just a verdant reality. Sometimes I feel the immense weight of that responsibility and it becomes disconcerting when I receive messages like “These names are awful! I hate them!” or “What you are doing is illegal and wrong, stop!” but I take a moment to listen to the names that come from within me and am refreshed by the purpose of my sacred mission.