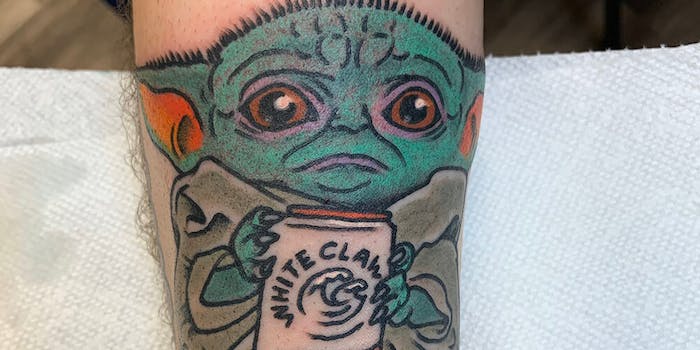 'A sadder tattoo there has never been.'

The internet’s love for memes is endless. But does its love extend to a meme tattoo that combines the precious Baby Yoda with supermarket star White Claw? That’s a little less clear.

Baby Yoda, a younger version of the Star Wars Jedi Master, has been circling Twitter since his debut on The Mandalorian in November. Star Wars fans are totally in love with the character—in fact, his undeniable cuteness is one of the only things fans agree on. But when one 29-year-old decided to get a Baby Yoda tattoo, he added a hard seltzer twist.

“Ain’t no laws when baby yoda drinking claws. To end 2019 I got a tattoo of Baby Yoda drinking White Claw,” Brock McLaughlin tweeted along with a photo of his freshly inked forearm.

To end 2019 I got a tattoo of Baby Yoda drinking White Claw.

The tattoo, of course, shows the baby-faced Yoda gripping a can of White Claw, the popular alcoholic seltzer that inspired a wave of memes over the summer. McLaughlin says the tattoo is a combination of his two favorite things.

“I’ve had a great year and wanted to commemorate it with the two things that brought me joy and laughs this year with my friends,” McLaughlin told the Daily Dot. “My friends are getting a real kick out of this.”

But some Twitter users were not impressed with the Baby Yoda-White Claw combination.

“A sadder tattoo there has never been,” @BabyYodaBaby tweeted.

was it worth the 114 likes pic.twitter.com/jIeeQtu317

“Been trying to find the words to explain just how much I hate this but I can’t. It sucks to no end,” another user tweeted.

been trying to find the words to explain just how much i hate this but i cant. it sucks to no end https://t.co/hqLSPW4fEw

“I don’t care who got the baby yoda white claw tattoo, I just want them brought to justice,” one irate person said.

I don’t care who got the baby yoda white claw tattoo, I just want them brought to justice.

He might be the first to add a White Claw, but McLaughlin is far from the first person to get a Baby Yoda tattoo.

watch me get sued for pirating this baby yoda tattoo pic.twitter.com/MegAFN7SA4

My tattoo artist, @AtticaBeck, did a #BabyYoda!

(Not on me, UNFORTUNATELY) #TheMandalorian pic.twitter.com/s257iUMZMj

And anyone who’s brave enough to share their tattoo online certainly has the Force within them.