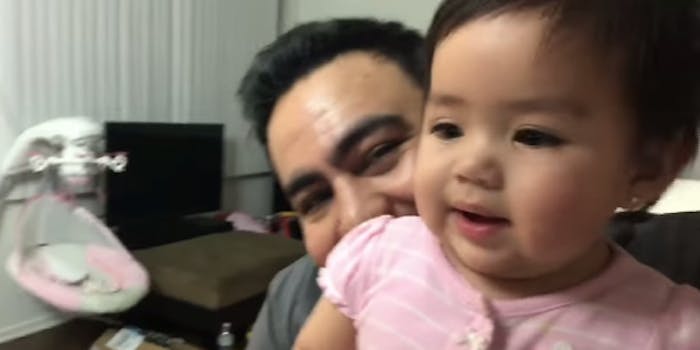 Screengrab via Liza and Albbie/YouTube

Babies sometimes get excited by random things, right? That’s just how it is when it comes to really young kids―delighted by some sights and sounds and frightened by others, all for reasons the average parent might never fully understand. But it’s usually pretty obvious when they want something and when they don’t. A recent video uploaded by YouTubers Liza & Albbie, featuring one of the best hits the Proclaimers ever made, demonstrates that almost perfectly.

It shows how the couple’s little girl, at various different times, reacts when “I’m Gonna Be (500 Miles)” by the Proclaimers starts playing. To say the toddler is lit up by the song would be an understatement, as it captures her full, delighted attention every time, even leading her to get up and walk over to the source of the music with an ear-to-ear grin on her face.

The Proclaimers, for the uninitiated, are a Scottish rock band formed in 1983, and “I’m Gonna Be (500 Miles)” was the hit single off its second studio album, Sunshine on Leith. It’s an enduring and popular song, and it probably sounds pretty familiar to anyone who spends enough time in karaoke pubs.

And, from the looks of things, it’s a pretty good way to hold a toddler’s rapt attention. Unfortunately, it’ll be quite a few years before she can belt it out at the karaoke bar herself, but it looks like she’s on the right track. You can check out Liza and Albbie’s YouTube channel here.