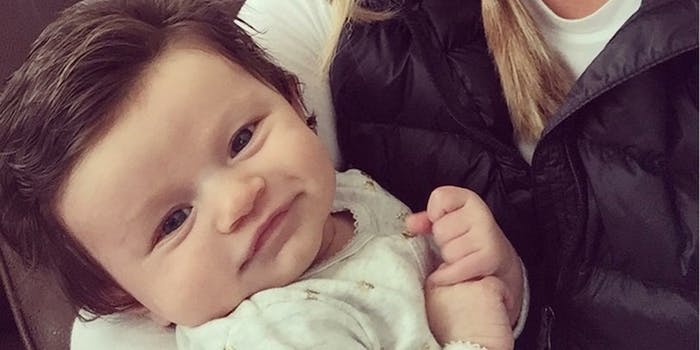 Gotta condition that 'do.

Isabelle Kaplan was born with a head full of hair, and it’s getting her a lot of attention.

According to ABC News, David and Mackenzie Kaplan’s daughter came out of the womb already bearing some luscious locks. But now, at the tender age of two-and-a-half months, Izzy’s hair has only gotten more robust.

A cousin of the newborn posted a photo of her to Reddit (it originally appeared on Mackenzie’s Instagram), saying, “I can kiss my days of being the cutest relative goodbye.” And to be honest, we totally agree.

Other Redditors have pointed out that Isabelle looks like a television news reporter with her fresh hairdo, perhaps the illustrious Ron Burgundy from Anchorman. One commenter even dubbed her “Rhonda Burgundy.” Of course, some Photoshopping ensued.

We can’t wait to see what Isabelle does next with her hair.