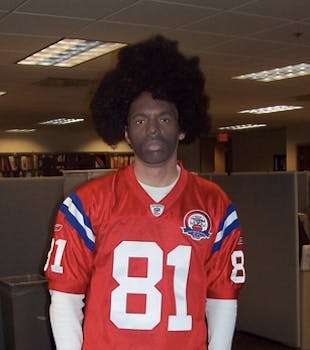 If you want to dress as a celebrity of a different ethnicity than you are, trying tweeting for approval first.

We can all agree it’s poor taste to go as an “illegal alien,” a “Muslim terrorist,” or any other racially charged costume for Halloween.

But what if you want to dress as a celebrity of a different ethnicity than you are? Trying tweeting for approval first.

Psy of “Gangnam Style” fame gave his blessing earlier this week, retweeting a Billboard story about getting his look for Halloween.

Twitter’s also how fans of Tom Haverford on Parks and Recreation discovered that Indian-American actor Aziz Ansari has no problem with white people making costumes of his character.

“Dear, @azizansari how do I tell my white boy friend that he can’t be you for Halloween? Or what should he do to look like you?” @__JONATHAN__S tweeted. 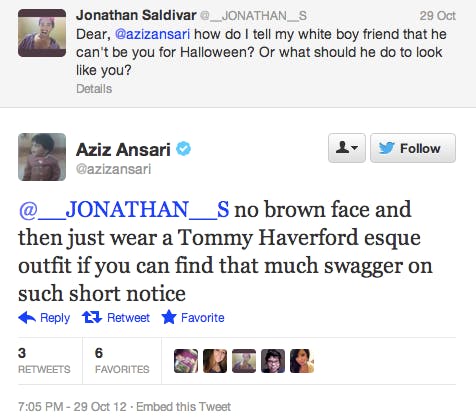 The “brownface” Ansari refers to is the practice of darkening one’s skin in order to look like another race, something he clearly finds offensive.

However, if you’re dressing up like Randy Moss, a wide receiver for the San Francisco 49ers, anything goes. All day on Halloween, the future hall of famer retweeted photos of fans dressed up as him, and these costumed fans were predominantly white.

“@RandyMoss still the best Halloween costume if you don’t include Sponge Bob. Happy Halloween: twitpic.com/njy0e ,” @WAD1980 tweeted of his 2009 costume. Keep in mind, however, that even if Randy Moss doesn’t find your brownface offensive, it’s likely that many other people will. Why not take a cue from Miley Cyrus’s Nicki Minaj costume? The actress altered her hair and clothes to imitate the pop star—and left her skin tone out of it.