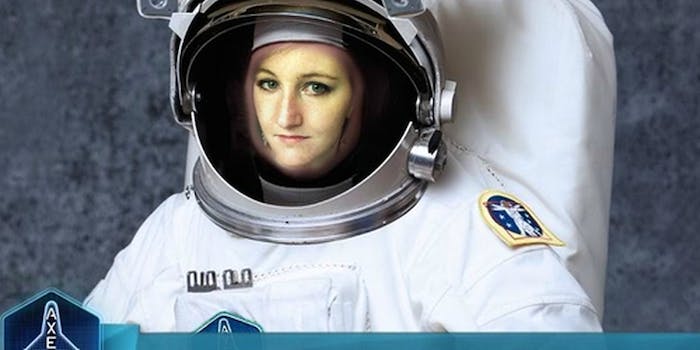 One giant leap for a woman in Axe’s astronaut contest

Despite the all-male marketing of an Axe Body Spray-sponsored contest that will send the winners into space, a female Tumblr user is near the top of the polls.

Axe—yes, as in the deodorant manufacturer—wants to send someone into space. In a contest presented by Buzz Aldrin, people are invited to register at the Axe Apollo Space Academy (AASA) for a chance to be upvoted into the stratosphere.

Considering Axe’s famously bro-centric marketing strategy, it’s not surprising that their advertising focuses heavily on the search for “a few brave men.” “Leave a man, come back a hero,” says Buzz Aldrin at the end of their Super Bowl ad, but as it turns out, men aren’t the only ones interested in winning a free trip into space.

Tumblr user Molly Pfaff entered the contest on Feb. 5, posting to her blog: “How awesome would it be if a woman (a fangirl, no less) actually won this thing? Sherlockians, Whovians, Potterheads, Trekkies: I want to be your impossible astronaut!”

Two days later, the post has garnered over 14,000 notes, and Pfaff has reached third place on the AASA leaderboard, with 12,000 votes to the 24,000 and 19,000 held by the two men currently in first and second place. With her vote count climbing by the minute, it’s clear that the combination of fannish community spirit and an easy one-click voting system has proven irresistible to Tumblr fandom.

Comments from voters are split between sci-fi fans who approve of Molly Pfaff’s Doctor Who references, and people expressing frustration at Axe’s sexism. “For the first functionally clad woman in an AXE ad!!” reads one voter’s Tumblr reblog.

It seems that someone at Axe has already noticed the sudden appearance of a woman on their leaderboard, because the message on the front page has been altered slightly to read that they are now searching for “a few brave civilians,” although the “Leave a man…” slogan is still in place. The portal to the U.K. site for Lynx bodyspray (the British brand name for Axe) remains the same, however. And while Pfaff and one other woman have now reached the top ten, it seems that the bulk of the site was only written with male contestants in mind: 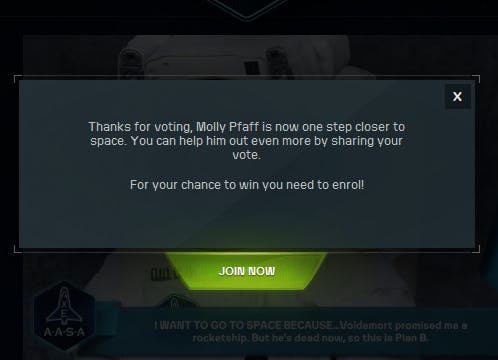 While thousands of Tumblr users flock to subvert the contest’s expectations, Axe is probably the biggest winner here. Molly Pfaff seems well on her way to becoming one of the 22 lucky astronauts, but she’s still sent at least 12,000 people to Axe’s new advertising site—although we can only guess at how many of her supporters will be in the market for men’s body spray that leaves you “smelling like a hero.”