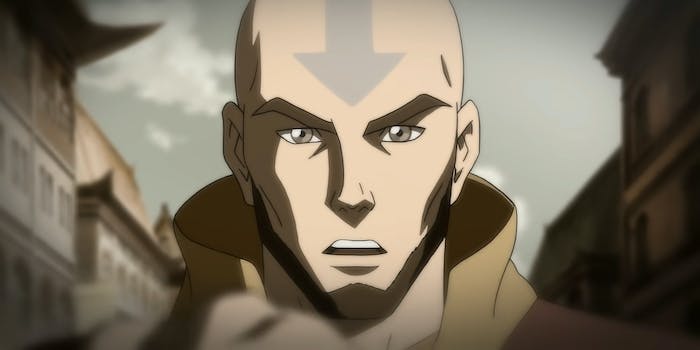 Warning: This article contains spoilers for The Legend of Korra.

One of the more self-indulgent aspects in The Legend of Korra, the sequel to Avatar: The Last Airbender (ATLA) that ran from 2012 to 2014 and is now streaming on Netflix, arrives late in Korra’s first season in the form of a series of visions. While the full story within the flashes provides vital information to unraveling the season’s big mystery, it doesn’t make it any less self-indulgent.

The fully realized visions come to Korra via her predecessor, Avatar Aang, as she’s locked inside of a metal box she can’t bend her way out of in the season 1 episode “Out of the Past.” She’s placed there by Tarrlok, a member of the United Republic Council with a secret (and, as of that episode, undiscovered) connection to Amon, the Equalist leader with the ability to remove a person’s bending, and season 1’s big bad. With no way to escape, Korra meditates to make sense of her visions.

The flashes are like a dream or memory that became a little fuzzy with time with a sepia-tinted color palette (akin to an old photograph or film) and blurred edges. Still, it nevertheless plays out like a fantasy for many ATLA fans. We see Sokka (who’s on the council that helps run Republic City), Toph (Republic City’s Chief of Police), and Aang (now a fully-fledged master), three of the heroes at the center of ATLA, all as middle-aged adults. They have the same hairstyles they had as kids with the addition of some more age-appropriate facial hair; Sokka still makes jokes, and Toph still calls Aang “twinkle toes.”

It all culminates at the trial of Yakone, a crime lord accused of using bloodbending (in which a waterbender can control a person’s body like a puppet by bending their blood) against the people of Republic City, which is illegal. (The defense argued that the alleged crimes didn’t take place during the full moon, the only known time a waterbender can access this ability.) He’s found guilty, but cuffs and chains can’t hold Yakone for long: He uses bloodbending to escape (proving that he can do it without the full moon), but Aang soon catches up to him and takes his bending away, the same thing Aang did decades earlier to Fire Lord Ozai. Aang’s experience with Yakone is a lynchpin for both of Yakone’s sons: One of them is Tarrlok, while the other sheds his birthname to become Amon.

It’s the briefest of snapshots into the lives of the original Team Avatar as adults. It’s joyous to watch, even though it tackles some heavy stuff and doesn’t bring an adult Katara or Zuko into the mix. While some of the criticism lobbied against Legend of Korra is rooted in sexism over making a complicated female character its lead, some fans were genuinely disappointed that “ATLA as Adults” wasn’t the show that we got. Instead of a direct follow-up to ATLA, Legend of Korra ended up being a much different show, one with a premise that the reason Korra is the Avatar is that, spoiler alert, Aang died.

In the years since Legend of Korra took its final bow in 2014, we’ve seen our fair share of nostalgia and fanservice-friendly reboots, revivals, sequels, and prequels almost solely aimed to pull at our heartstrings via the properties we adored as kids. Many of them lean heavily on nostalgia as a beat-for-beat plotting guide, as a way to course-correct a more controversial predecessor, or even worse, as a relic to be revered or worshipped; when fanservice is deployed, it’s only surface level. Legend of Korra could’ve easily leaned into it and recreated a repeat of ATLA. It’s largely regarded as one of the greatest animated shows ever made both when it aired and in the years since, and ATLA’s Netflix resurgence over the past three months is only proving the show’s ultimate longevity. And Legend of Korra has more than its fair share of callbacks and echoes up to the series’ romantic and final shot.

Instead, the show often went in a different direction—and usually under much more scrutiny given ATLA’s acclaim; it’s no secret that Legend of Korra is a more uneven series than ATLA. Legend of Korra avoids returning to that level of nostalgic temptation. Yes, we see several ATLA players show up throughout the series, callbacks, quotes, and often, a fascination with the past. But those glimpses are limited in scope, or they primarily serve Korra’s story or that of other new characters. They were, above all, complicated people.

Katara’s role is limited to that of a teacher and healer (which is a bit of a letdown in comparison to everyone else), but she’s someone who Korra respects. A retired Fire Lord Zuko, who played a role in stopping a terrorist group from killing Korra as a child, reemerges after that group escapes from their prisons to offer assistance. The Fire Nation as a whole is so wary of repeating its past mistakes that its passiveness allows history to repeat itself in the Earth Empire. We finally get to see Iroh, who died well before the show started, during one of Korra’s trips in the Spirit World; a brief moment when Korra mentions Iroh to Zuko is touching but is interrupted before it can overtake the scene. Sokka died before the show started, so he’s used sparingly. Even General Zhao makes a brief appearance in the Spirit World’s Fog of Lost Souls, where he was thrown in after the crimes he committed in ATLA.

But with Aang and Toph, it gets even more complicated. Aang initially plays a more significant role as Korra’s spiritual advisor. Still, he appears sporadically, and that narrative device is cut completely after Korra’s access to the Avatar Cycle is severed, forcing her to rely on other methods and other people to help her solve problems. As we spend time with Aang’s three children, we learn that as dedicated as he was to keep the world in balance, it often came at the expense of his family. He outwardly played favorites with Tenzin over Kya (a waterbender) and Bumi (a non-bender until the Harmonic Convergence granted him airbending abilities). But with the weight of an entire culture on his shoulders, Tenzin didn’t have it easy, either. Simply, Aang was a bad dad.

Toph gave her daughters Lin and Suyin the freedom she didn’t have, but it backfired. Lin followed in her mother’s footsteps but became frustrated with Toph for her more carefree style of parenting and unwillingness to answer questions. Suyin took it in the complete opposite direction, and her association with an organized crime unit led to Toph compromising her morals to cover up her daughter’s crimes. By the time we finally meet an elderly Toph in season 4, she has cut herself off from the rest of the world. She’s cranky and has no patience for Korra when others spent years coddling her after Korra was poisoned with mercury and got PTSD as a result.

Toph just wants to be left alone. She’s like a precursor to the older and guilt-ridden Luke Skywalker that we met in The Last Jedi: Not at all what you expected, but you can piece together just how she became the way she is.

It also ends up giving us the antithesis of the show’s early bout of self-indulgence. Korra, having a chance to speak to a member of the original Team Avatar without some fantastical or supernatural element immediately threatening her life, wants to hear some old war stories from Toph. Toph has very little patience for those questions, but she gives barebones responses until Korra becomes bored.

Toph doesn’t need to explain what happened during that war; anyone who watched ATLA knows what happened, and even if they didn’t, they saw the result of that war. But more importantly, it doesn’t matter much in this instant. And by paying it a minimal amount of service before further delving into Korra’s journey toward recovery, it’s almost as if the show is winking and saying, yes, it happened, but let’s get to the next thing. The next thing can be just as worth exploring as the first thing.

The Legend of Korra is available on Netflix starting Friday, Aug. 14.