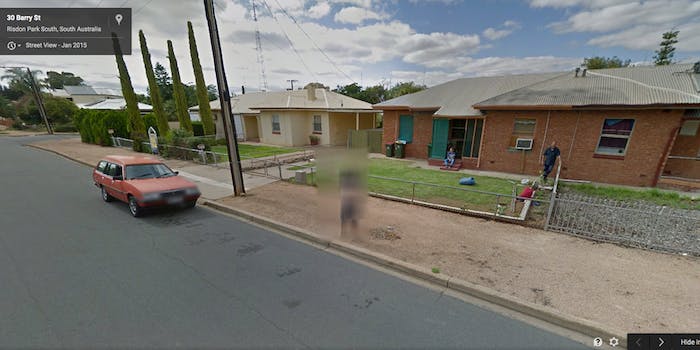 It took Google 3 tries to censor this happy Aussie flasher.

In its attempt to visually map every corner of this earth, Google Street View has captured some pretty remarkable sites—and wild sights, from curbside breakups to dressing-room hookups. Add to that list the breasts of 38-year-old Karen Davis, who ran out to flash a passing Google vehicle in TK.

“I look at Google Maps a lot and I wanted to be on there and I thought this is the way to do it,” Davis told a local Australian paper.

On Tuesday, Google swooped in to impose some pixelated modesty—and failed. Its first attempt missed the mark by a foot or so, leaving a strange cloud of pixels hanging next to Davis’s person.

Yet another attempt managed to inter the Australian woman in a tomb of pixels, like Han Solo.

Davis says she doesn’t regret the incident at all. Though her bare-chested bravery has caused her to encounter some detractors, she’s proud to say she flashed the Internet. “I got to tick something else off my bucket list,” she told the Port Pirie Recorder. And she posted her final word on Facebook: “Haters hate, you got the guts to do it?”