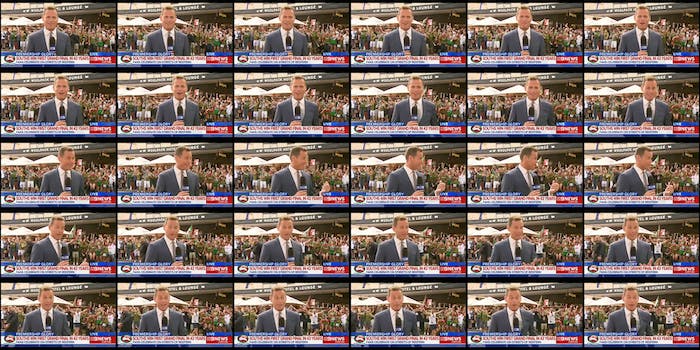 An Australian rugby fan whipped out his penis on live TV

And then he waved it around like he just didn't care.

The South Sydney Rabbitohs won their first National Rugby League championship in 43 years and some of their fans are in full (frontal) support.

Channel Nine’s Tom Steinfort was in the middle of a live shot surrounded by fans, who are called Bunnies, and it’s apparent that they were excited. Some of them stayed across the street from him and others surrounded and overtook his shot, but one lone man in the background decided to take it to the next level with his pants around his ankles and did what most bunnies do: hop.

An Instagram video of the streak is already down, but there are plenty of mirrors already going around the Internet and at least one website has a censored version up.

Steinfort remained ever the professional during the live shot, but he took to Twitter to apologize for the streaker after the cameras stopped rolling.

Soooooo, the perils of live TV…..apologies for that nudity in my live cross just then

Top story on the SMH and News…..yikes, wonder if that Bunnies fan has copped a call from his mum yet? pic.twitter.com/6iVTIlWwav