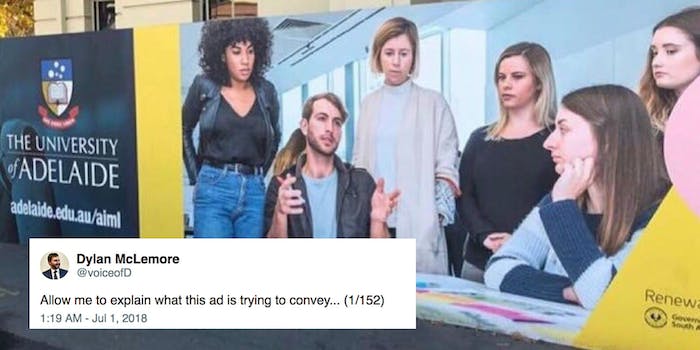 Welcome to the 'University of Well Actually'

A sidewalk advertisement for the South Australian government is getting roasted on Twitter for its decidedly unfeminist visual.

The billboard shows a man appearing to explain something (ahem, mansplaining) to a group of five women, something anyone who has ever been to any meeting can relate to. The women, for their part, look utterly bored with the presentation.

Former model Melissa Stetten shared the ad with Twitter, titling it “The University of Well Actually.”

The University of Well Actually. pic.twitter.com/nZ5NuXiVRn

Do they offer an M.S. of Ogyny?

People on Twitter mocked the ad, guessing at the probable thoughts going through each woman’s head as they sit through the mansplanation.

The one immediately to the right of center thinking "If I'm careful, nobody will ever find the body…"

They also gave the man in the advertisement some dialogue.

A rare self-aware dude even offered to explain the advertisement.

An astute observer noticed the ad isn’t actually for the University of Adelaide, like many thought based on the angle of the photo, but for a South Australian government campaign. The government’s insignia can be seen in the bottom right corner of the billboard.

It's real, but it's not part of the University of Adelaide advert (which is the sign to the left off screen). This advert is from a South Australia government campaign (see bottom right), which is probably actually worse.

As for how the advertisement got approved in the first place, well, it’s anyone guess.