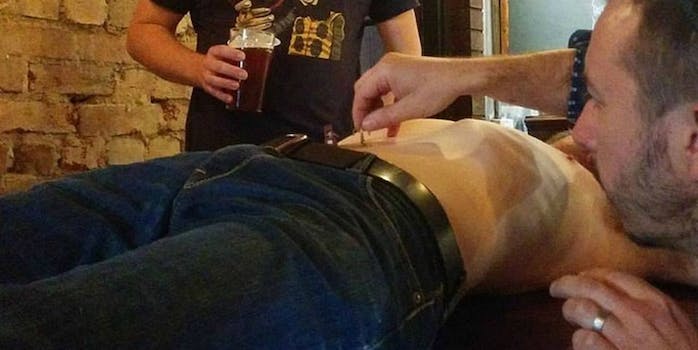 Try swallowing this Australian beer made from the brewers’ belly buttons

This sounds disgusting and/or delicious.

We simply don’t have enough ways to drink alcoholic beverages that emanate directly from the human body. Thankfully one Australian brewery is producing beer made from the owners’ belly buttons and apparently everything that lives inside.

Perhaps that doesn’t sound delicious to you, but considering the inspiration for this project was taken from an Oregon brewery that fermented its beer from the yeast of the brewer’s beard, this sounds more palatable.

But then again, belly buttons house thousands of species of bacteria, so maybe a little beard hair in your suds is a better option.

Either way, the yeast strain from 7 cent Brewery, which is based in Victoria, Australia, was isolated by swabbing the belly buttons of each brewer and then “streaking out the samples on agar plates,” the brewery wrote in a blog post on the website:

After allowing the plates to incubate, we found all sorts of interesting things growing, including what appeared to be colonies of yeast. Positive controls were used to help us identify yeast colonies and negative controls were used to ensure our techniques were sterile. We selected individual yeast colonies and grew them up until we had pitchable quantities for trial batches.

The brewers said the yeast has taken on the qualities of a Belgian beer with hints of spiciness, clove, and light banana esters, and they’ve added fresh orange zest and toasted coriander seeds to complement the yeast along with barley, wheat, oats, and rye.

“We are really interested to see if the idea of drinking something that originated from a brewer’s belly button is too much for even the most hardened beer geek,” the brewery wrote. “Once you get used to the idea that yeast is yeast no matter where you get it from and that the water we drink is really recycled dinosaur urine, then you can just sit back and enjoy the beer…..in theory.”

If you can get past the thought of where the yeast originated, the beer probably tastes just fine. But it’s also unclear whether beer made from the belly button would be more appetizing than that which is brewed from the essence of a woman.