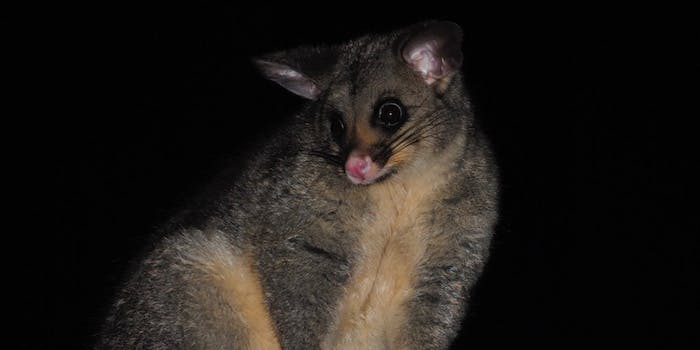 Man records the most adorable home invasion ever

At least it didn't go for the TV.

When YouTube user Alex Steel heard rumbling and crashing sounds coming from the kitchen of his Australian home, he naturally thought that he was about to witness—and of course record—a home invasion in progress.

And that is exactly what happened, only with a far more pleasant species of home invader.

Steel found himself face to face with a tiny possum, casually gnawing on some leftover bread. He fired up the camera anyway in order to gain a piece of evidence—of how adorable this scene was.

See, Australian possums are rather cute little creatures, the kind you would find in an animated Disney movie. They’re far removed from the possums we have in the United States, which look like sewer rats magnified about 50 times.

As a resident of Philadelphia, a city whose crime rate is matched only by the failure of its professional sports teams, I feel compelled to warn those of you in rough areas that wooden spoons probably shouldn’t be used against actual home invaders.