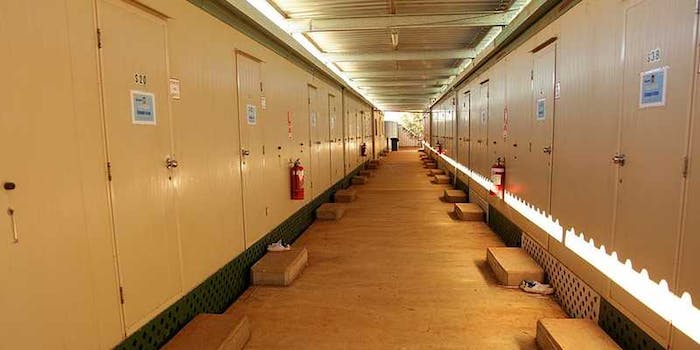 In the midst of an immigration debate, asylum seekers have their information released to the public.

In what’s being called the most serious privacy breach in Australia’s history, the identities of almost 10,000 adults and children have been exposed on a government website.

According to Guardian Australia, which identified the breach, the data belongs to the population of a mainland facility, and a similar facility on Christmas Island, where asylum seekers are currently detained. Among the journalists who broke the story was a Melbourne-based political activist who goes by the pseudonym Asher Wolf.

The leaked database of asylum seekers was made publicly available on the Immigration department’s website, and contained a number of personal identifiers, including the names, arrival dates, nations of origin, and the locations of the detention facilities where the detainees are being held.

People fleeing from war-torn countries including Afghanistan, Iran, and Syria are among those whose privacy has been compromised. According to Guardian journalists, who withheld the location of the data from their report, “A large number of children have been identified in the release, which also lists whether asylum seekers are part of family groups.” The recently leaked data shows that some asylum seekers had arrived in the territory as late as last September, while others have been held in detention camps by the Australian government for close three years.

This stop the boats policy is a disgrace. The maltreatment of asylum seekers must stop. Time for a new immigration policy, Australia!

The release of the information may be a violation of the Privacy Act of 1988, which states that private records must be “protected… against loss, against unauthorised access, use, modification or disclosure, and against other misuse.”

“The breach raises serious questions about whether those identified could be placed at risk of retribution if they are returned to their countries of origin,” the Guardian said.

Illegal immigration has been a controversial topic in Australia for some time and was central to the nation’s September 2013 parliamentary elections. Following a landslide victory against Labor party leader Kevin Rudd, conservative Prime Minister Tony Abbott immediately launched “Operation Sovereign Borders,” a joint-task force that combines elements of the federal police, Border Protection Command, and Immigration department, under the authority of the Australian Defense Force.

The release of private data is but one problem facing Australia regarding their immigration policies, including reports of violence and international criticism. The deportation of asylum seekers to holding facilities, such as those on Manus Island, in northern Papua New Guinea, and Nauru, a tiny island nation 4,500 km northeast of the country, have steadily increased over the past few years.

A disturbance at the Manus Island facility this week resulted in 77 injuries and the death of an Iranian asylum seeker. A gunshot victim was also transferred to Australia for medical treatment, according to an official. Manus Island’s police chief, Alex N’Drasal, placed the blame for the disturbance—revealed to be a political protest—on the Abbott government, which he claimed had ignored the grievances of the detainees.

”We will ensure that these camps are run fairly. They will be firm if necessary,” Australia’s prime minister told the press.  “We will not succumb to pressure, to moral blackmail.”

Refugee advocates have also allegedly received reports that locals, working in concert with Papua New Guinea police, breached the compound’s perimeter and attacked asylum seekers. Ian Rintoul, of the Refugee Action Coalition, claimed he had received reports that detainees had been “chopped with machetes” and “beaten with sticks.”

The Abbott government’s immigration policy has been sharply criticised by other nations as well, including Indonesia, which disapproves of Australia’s policy of turning away maritime arrivals. This week, China’s vice-minister of foreign affairs, Li Baodong, told reporters he was concerned about asylum seekers being “illegally repatriated to other countries.”

According to the refugee lawyer David Manne, who spoke with the Sydney Morning Herald, one possible outcome for detainees whose privacy was violated by the Australian government is validation of their refugee status.

Australian officials, however, have indicated that there is no general rule for this situation, and whether the government placed asylum seekers in danger by violating their privacy has yet to be seen.