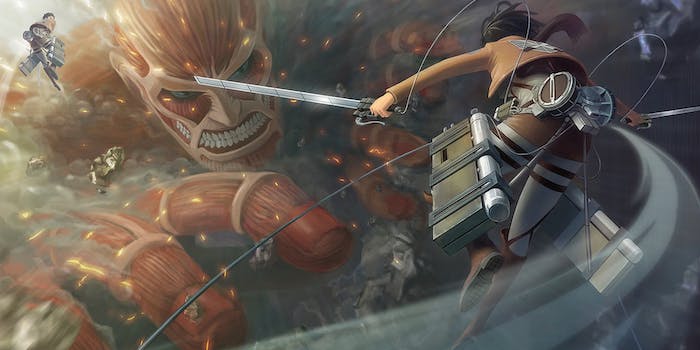 Even if you're not into anime or sci-fi, this is one show worth watching.

I enjoy Hayao Miyazaki films very much and I know what anime is, but until I attended New York Comic Con last year I had no clue why all the teens were dressing as Attack on Titan characters. I had no idea what it even was. 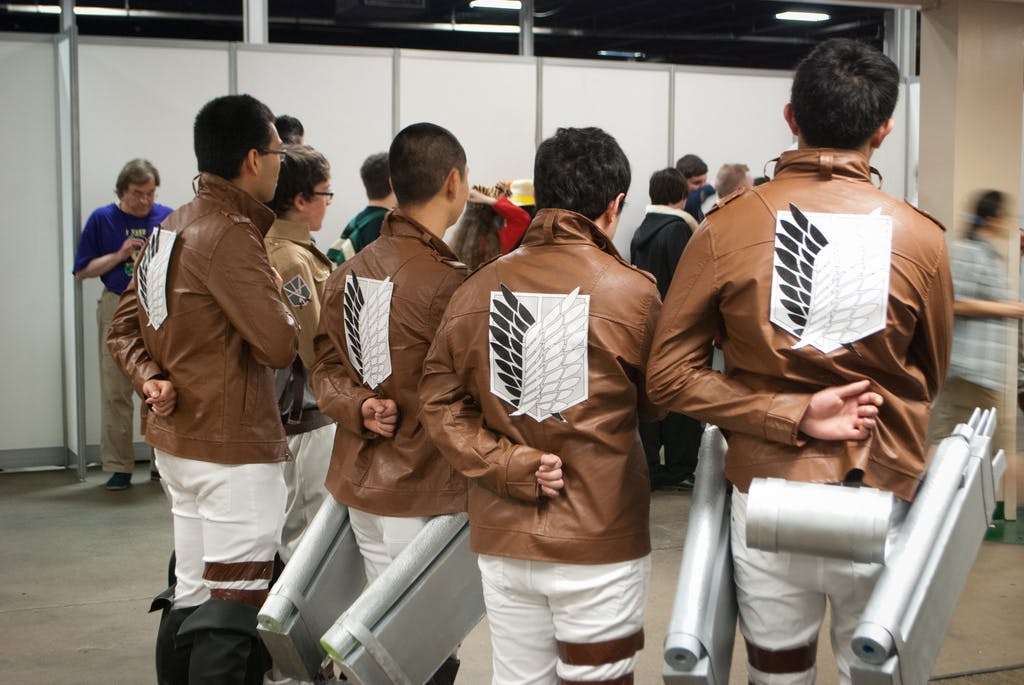 Photo by CakeAndTea via photopin (CC BY 2.0)

Months later and on a whim I decided to look it up. Being a fan of film, science fiction, horror, and pop culture in general I felt I owed it to myself to sit down and give an anime series a try. Yeah, yeah, I’m a guy who likes sports and various other dude things, but I figured I could get through at least a couple 20-minute episodes until I got Hunger-Gamed out.

I discovered Attack on Titan takes place far in the future and follows Eren Yeager, Mikasa Ackerman, and their buddy Armin Arlert. Eren’s father has left for mysterious reasons and his mother is eaten by a Titan during an attack on humanity’s last stronghold. Titans are giant human-like creatures that suddenly appeared a hundred years earlier and nearly wiped out the human race, and they’re threatening to do so again. Eren takes up the fight against the Titans with his friends and the last remaining humans.

Turns out I tore through all 25 episodes in two nights. Attack on Titan is fantastic. I couldn’t stop watching. I was shocked to discover a beautifully animated, tightly plotted, adult-themed horror drama wrapped in an anime package. It is Walking Dead wrapped in an anime viel. This coming from somebody who loved the cult classic Heavy Metal in the ’80s and who recently rewatched it only to find it really just isn’t that good.

Eren is a younger version of Rick, Mikasa is Michonne, and Armin is essentially Glenn. Each one of these characters have a strong development arc throughout the first season where we get to watch them transform from children into battle tested and weary survivors and fighters of the Titan scourge.

There are moments where the series bogs down a bit in dialog that slows down the action for a 20-minute episode, and the two-minute-long intro is a bit much when watching back-to-back-to-back episodes, but these are all minor gripes.

Before the series began its recent run on FUNimation Toonami, explaining that I loved an anime series to some of my less nerdy peers—much less my loving wife—was like describing baseball to a foreigner.

But now as word slowly starts to trickle out to more of the general masses, I feel as if my initial excitement about the show is being somewhat vindicated.

There’s strong bias against any group or group of fans that doesn’t go with what is considered the norm. What happens is you find the norm in the places you identify with and enjoy, regardless of whether or not it seems silly or foreign to somebody else.

Take the ever-easy-to-bash-on Trekkies. How easy it is to make fun of them with their unwavering devotion to a science fiction series and their Spock salutes and fictional Klingon speaking ways. But dig a little deeper into the community and you’ll find generally normal and well-adjusted people who just happen to share a passion.

Liking anime or going all the way over to being “otaku” is really no different. I’m not obsessed with Attack on Titan, but I’ll be damned if I don’t watch the newest episodes when they come out. I enjoy Star Trek (Star Wars is better, sorry!), but I don’t wear the ears or dress the part.

I’m excited about a new universe of enjoyable content being opened up to me.

I might even have to check out the Attack On Titan manga now as a filler until the third season comes along. I’ve heard it is exceptional from a fellow Attack On Titan fan. Yes, I run with that crowd now, but don’t expect me to attend NYC Comic Con 2014 in full cosplay gear.

But do yourself a favor and at least check Attack On Titan out even if you’re not a fan of anime and even if you don’t particularly like cartoons or science fiction. At least give it a shot. You might find yourself surprised at how much you enjoy it.

Chris C. Anderson (@hintman) is the director of content and editorial at Pixable.com, a new app and website that shows you what you need to see today.

Photo via BagoGames/photopin (CC BY 2.0)