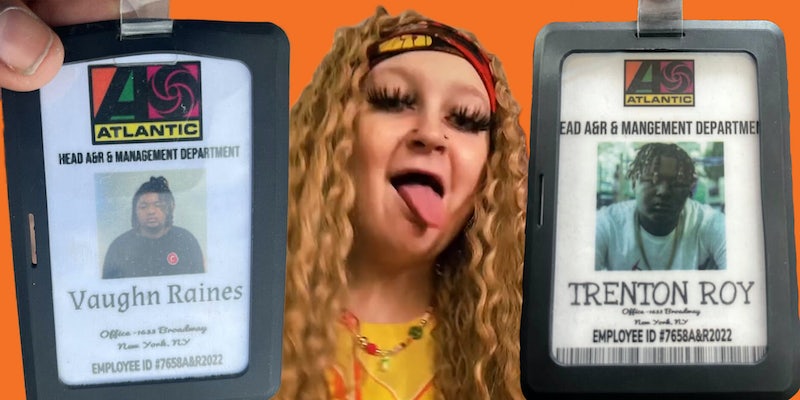 'This guy does not manage me and he never has!'

After TikToker Britt Barbie went viral for her highly divisive “Period Ahh” video, a man who claimed to give her a record deal was revealed by social media users to be impersonating an Atlantic Records A&R [artists and repertoire] talent representative. Users also exposed him for requesting money from aspiring artists.

The accused man goes by YBN Drippy online (@drip2fye) and has over 175,000 followers on Instagram. While some of his claims were recently deleted, Drippy claimed on Instagram and LinkedIn he managed Lil Nas X, Lil Uzi Vert, Ice Spice, Cardi B, Soulja Boy, and other famous musicians. On his LinkedIn, Drippy says his title is “Head A&R Operations & Administration” at Atlantic Records. He also posted images on LinkedIn soliciting $25 music submissions with the chance to be “signed” by Warner Music Group and Atlantic Records.

On LinkedIn, Drippy also posted a name tag with an Atlantic Records logo, his picture, and the name Trenton Roy. However, when Passionfruit asked for proof of his employment at Atlantic Records, Drippy provided Passionfruit with a photo of a name tag with a completely different name: Vaughn Raines. Upon request, Drippy did not provide any official company email or documentation of his employment beyond the name tag.

The online speculations surrounding Drippy’s falsified role at Atlantic Records rolled in shortly after a white TikToker known as Britt Barbie (@brittbarbie3) went viral earlier in the month for a video—which now has over 38.3 million views—in which she mimics African-American vernacular English and raps “Period ahh, period uhh” over a beat. Barbie faced controversy because of her adoption of Black aesthetics in her video, and due to accusations she is mimicking a speech impediment in her other TikTok videos.

Barbie’s viral “Period Ahh” video especially picked up steam after famous artists Baby Tate and Chloe Bailey duetted the video over the weekend, freestyling over the beat in the TikToker’s video and gaining over 18.5 million views total. Baby Tate has since deleted her video.

Soon after Barbie went viral, rumors circulated that she got signed by a man claiming to be an Atlantic Records talent representative. The controversy was fueled after TikToker and rapper Crystal Crave (@cravecrystal) made a now-deleted video saying Drippy previously met with her and told her she wouldn’t be signed by Atlantic Records because her music was “overshadowed” by her activism. In the video, she then shows screenshots of Drippy’s now-deleted Instagram posts about “signing” Barbie to his alleged record label, “Drippy Mgmt.”

“This man legit just gave this girl a whole record deal? Let me make myself clear. I’m not mad at the girl, I don’t have a problem with the girl. I thought the video was funny myself. … I wouldn’t be so upset if those same A&R representatives didn’t sit up in my face and tell me that my activism for the Black community was a problem,” Crave says in the now-deleted video.

Social media users on Twitter and TikTok said they were outraged because they thought a white creator appropriating Black aesthetics was given an opportunity by the same talent representative who had reportedly rejected other Black creators for being too much of an “activist.” However, users soon noticed inconsistencies in Drippy’s claims—including that Lil Nas X, Lil Uzi Vert, and Ice Spice are not under the same record label—leading them to accuse Drippy of falsifying his connections to both the celebrities and Atlantic Records. Users also accused him of asking aspiring musicians to pay him for “music submissions” and “label signings.”

In a now-deleted video, Crave shows screen recordings of alleged Instagram direct message voice recordings from Barbie. “That person did not actually sign me a record deal, they’re fake. Um, I don’t know who they are. A lot of people are telling me they’re a scammer. I don’t really know them,” Barbie says in the recordings. Barbie also says she believes Drippy is impersonating her on a fake Instagram account (@britbarbie22), which is tagged on his account.

In the video, Crave says she always was skeptical of Drippy. “Something felt off when I initially met this man. This man presents himself as an A&R representative for Atlantic Records. And regardless of how we feel about this girl, this man is lying. He is selling merchandise in order to take money from people. And using her name and her likeness in order to do so,” Crave says.

In an Instagram Story posted Wednesday, Barbie posted a screenshot of Drippy’s Instagram account and wrote: “This guy does not manage me and he never has! We were friends until he started claiming false info he also runs a account of me that’s not even me!”

Passionfruit reached out to Britt Barbie via Instagram comment and to Crystal Crave’s management team via email. They did not respond in time for the publication of this article.

In an interview with Passionfruit, Drippy continued to claim he works for Atlantic Records. In response to those pointing out the artists he claims to work with are all at different labels, he alleged he has “his hands in a lot of artists” working “behind the scenes.” He also claimed he did deny “signing” Crave because he thought her activism was “overshadowing” her music and claimed she was “bashing” him because of his rejection. Drippy said although Barbie publicly denounced him, she is still in a “two-year contract” with him. Drippy also claimed Barbie posted him on her page. He provided Passionfruit with screenshots—which appear to have been edited—of Barbie on a video call with him.

Though he continues to be criticized online, Drippy’s social media accounts are still active with claims of being in the A&R department. When told an Atlantic Records representative denied his employment at the company, Drippy said to a Passionfruit reporter: “FUCK OFF I GOT SOMETHING FOR U.”