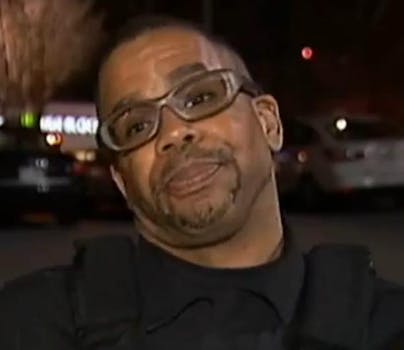 A mall manager stopped an altercation that almost turned physical by whipping out his stun gun, and the Internet applauded.

An Atlanta mall manager has become an overnight hero after being identified in a viral video that shows him his business from two raucous women.

The eight month old video—which has been viewed more than 1 million times—features Darien Long, who patrols the mall in a security uniform, yelling at two women “to back it up” as they hurl obscenities and spit at him outside downtown Atlanta’s Metro Mall. As the two women yell, a group of children stand nearby screaming things like “That’s why you gay, That’s why you gay.”

At about the 3:20 mark of the video, one of the women begins to hit Long on the head. He is ultimately forced to use his taser.

The entire altercation was captured by Long’s lapel video camera and was posted on LiveLeak three days ago, where it collected 6,200 comments. The video also found its way to Reddit’s r/JusticePorn forum, a place “to see bullies getting their comeuppance.” It has since collected more than 4,200 comments expressing concern for the children and praising Long for his patience.

“The security guard didn’t use excessive force or anything,” Leono9 commented. “It’s pretty sad this sorry excuse for a mother would instigate violence in front of her small children, CPS [child protective services] needs to step in and take her children if they haven’t already.”

Long was interviewed by Atlanta news station WSB-TV about the incident while wearing his security outfit–which is fully equipped with a pistol, bulletproof vest, and video camera.

“I feel like the taser and the camera are the two most effective tools that I have,” Long told WSB-TV. “Do what you’re supposed to do or you get what’s coming to you.”

The woman in the video was charged with disorderly conduct, criminal trespassing, contributing to the delinquency of a minor, and simple battery.