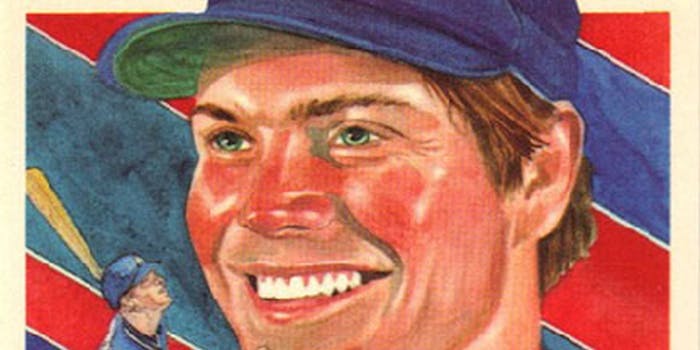 Dale Murphy makes the 1982 baseball season come alive 30 years after it was played.

Baseball is a timeless game, one where today’s teams are regularly compared with legends of old and memories from thirty years ago are just as vivid as the ones made yesterday.

On Twitter, one ballplayer from the Atlanta Braves is helping bring back the memories, one at a time. He tweets recaps of every game from the 1982 season as if it were happening today.

Dale Murphy—an outfielder, first baseman, and catcher who played eighteen years at the Major League level for the Atlanta Braves, Philadelphia Phillies, and Colorado Rockies— spent the first two weeks of the 2012 baseball season managing a Twitter account with the handle @1982Braves. Launched on April 6, Murphy believes it is the first Twitter account dedicated to looking back at a sports season that happened long ago.

“I actually got the idea from reading the World War II tweets,” Murphy told the Daily Dot, referring to @RealTimeWWII, a Twitter account that tweets the events of the second World War in real time. “They’ve been really fascinating with the way that they’d tell the story in real time. I was just sitting there one day this winter and thought that I should do a 1982 daily tweet and follow that season.”

Murphy, 56,  lives in Utah with his wife and eight kids and splits his time between public speaking, writing, and running the I Won’t Cheat foundation. He chose the 1982 season because it was the first one in a while in which the Braves had been any good.

Mired in mediocrity since home run hero Hank Aaron left the team in 1974, the 1982 Braves exploded out of the gate and won its first 13 games. The team would go on to win the National League Western division and a trip to the National League Championship series, where it lost to the St. Louis Cardinals in three games. Murphy himself celebrated the season by winning his first Most Valuable Player award.

“It was so fun because it was so unexpected,” Murphy said. “When we won that thirteenth game in a row, people ran out on the field! We hadn’t done anything out there for a long time, and all of a sudden, this happened. We’re running off the field trying to get through a crowd of people. There’s still a real connection with Braves fans and those early 1980s teams.”

Over 1,000 fans are currently following @1982Braves to make that connection happen today. Some will make comments on the funny, retro uniforms shown in the pictures and videos, while others will go so far as to remember particular games themselves. Murphy’s effort in reeling in the years doesn’t disappoint.

Every day, Murphy and his assistant Mike Studdard tap into the box scores on baseballreference.com to see what happened with the Braves on that same date thirty years prior. The two comb through stats and notes to find a few game highlights and produce a 140 character recap of the game’s outcome that night.

He includes pictures of notable contributors to that game—and sometimes includes photos showing where he chose to celebrate the win. When good footage is available, he adds in YouTube clips cropped from a TBS documentary called It’s a Long Way to October that aired after the season and documented the Braves’s year.

“We were thinking that it would be fun to do some video interviews if I see some of the guys this year,” Murphy said. “And I’ve gotten a few suggestions for my walk-up song. [That’s the song played for batters as they walk up to home plate.] It’s a fun thing for fans, you know? It’s just a great way to reconnect to the guys who were out there.”

Murphy said that he’d like to see more teams get involved in reliving their memories on Twitter.

“Think about what the [New York] Yankees could do!” he said. “You could go back 100 years or go back to the times of Babe Ruth. Follow Roger Maris’s season when he hit 61 [home runs] and do something special at the exact moment that he broke [Babe Ruth’s] record.”

“You connected with those seasons and players for some reason,” Murphy said. “People want to remember how it all happened.”

Editor’s note: An earlier  version of the story incorrectly stated the number of  most  valuable player awards that Dale Murphy won. We regret the error.