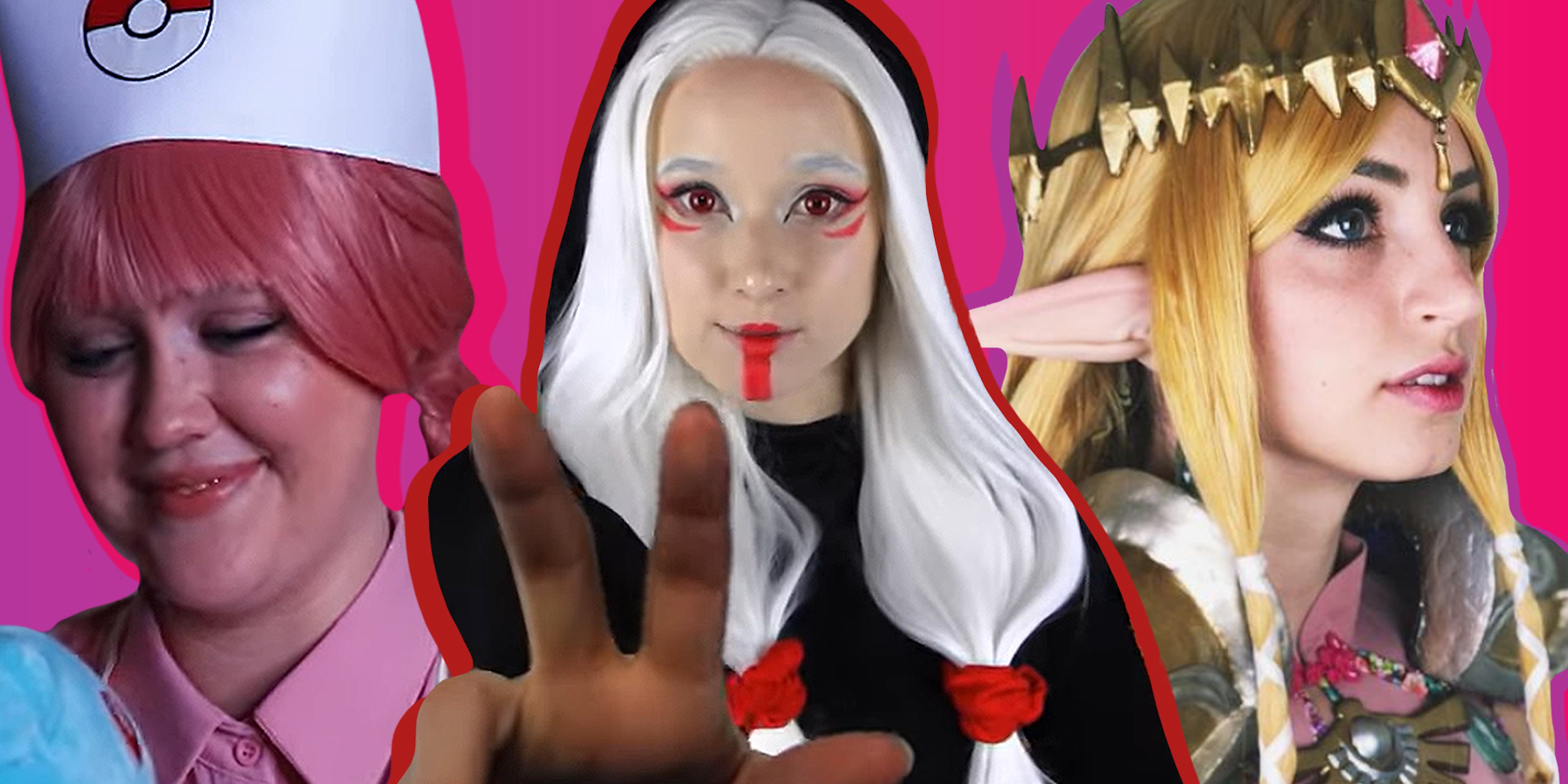 From ‘Game of Thrones’ to ‘Star Wars’, these cosplaying ASMR creators craft immersive experiences for their audiences

As we sit down for a virtual interview, Amy Kay is barely recognizable on Zoom. Like many other ASMR content creators, Amy Kay integrates cosplay and fantasy fiction into her videos—so I had imagined I would be meeting an almost larger-than-life character with elaborate makeup, colorful hair, and blue skin. Instead, she’s barefaced with her blonde hair tied into a loose ponytail and wearing a simple gray top.

ASMR, for the uninitiated, stands for autonomous sensory meridian response. According to a study from Plos One, the practice can help people relax and sleep through a set of “triggers” which create a response also known as “tingles.” The study found that ASMR may be beneficial to mental and physical health and is associated with reduced heart rates and higher skin conductance levels. According to the American Sleep Association, “ASMR is typically triggered by certain sounds or personal attention, and is also sometimes visual.”

A growing number of ASMR artists have expanded on this basic idea in their work, with some creators making an elaborate experience by massaging or taking care of another person on camera while there are some who simply sit and eat on screen combining mukbangs and ASMR. Others, like Amy Kay, incorporate ASMR into elaborate role plays using fantasy fiction characters from popular television shows, books, comics, anime and games. This genre of fantasy ASMR is particularly popular because of its immersive experience, and Amy Kay has amassed 338,000 YouTube subscribers for her work since 2014.

In one of her more recent videos, she is dressed up as a healer from the Citadel, a character from the popular Game of Thrones spin-off,  House of the Dragon. Only her face is visible on camera. Her natural dirty blonde hair is covered by a platinum wig tied into a braid. She shrouds her head with a red scarf and wears a blue dress. She has come to tend to you—a royal prince or princess. A fire crackles in the backdrop as she dresses your wound and soothingly whispers to you that everything will be okay, at times in High Valyrian—the fictional language from the Game of Thrones franchise. In the comments section, her audience is rightfully impressed by her use of Valyrian since it adds authenticity.

For many of the creators, watching ASMR content themselves is what led them to creating it themselves. Amy Kay came upon ASMR when looking for a way to deal with her anxiety, while for Sage Davis, another ASMR content creator who runs the Whisper Wind channel, it was insomnia.

“One night, I was desperately searching for videos to help me fall asleep and came across this [other ASMR] channel which opened a whole new world,” Davis explained.

She watched ASMR for six years as a consumer before she created her own channel. Plus, she always loved fantasy books and would get lost in them, viewing them as an escape. She told Passionfruit that her love of this genre is what led to her being more attracted to the fantasy and cosplay side of ASMR.

“There were a few different channels that were a little bit of fantasy and I really loved that but there wasn’t a channel that did just that and had a whole continual story and as a viewer I thought it would be so cool if somebody did just that,” she says.

Through her own channel Whisper Wind, which has garnered 11,300 subscribers since its start in 2019,  she not only does cosplay but has created an entire village of original fantasy characters.

Gibi is one of the most prominent ASMR content creators on YouTube. She has amassed 4.4 million subscribers since starting her channel, which includes content like role plays of fantasy characters, original characters she created, and a wide array of ASMR videos.  In an interview with Passionfruit, she says that the integration of cosplay into her channel was “very natural” and cited it as one of the “biggest reasons” for starting her page.

“I think people love immersion!” she said. “It’s like light virtual reality… You feel like you’re talking with your favorite characters, part of your favorite fictional worlds. What’s not to love?”

These sentiments are echoed by other content creators too. “You feel like you’re in a movie. You find a whole experience and lose yourself in it,” Shanon Browski of Shanny ASMR told Passionfruit.  She had one of her first ASMR experiences after watching a scene in A Nightmare Before Christmas, in which a character was playing around with Christmas ornaments. It inspired her to create sensory videos using similar character work.

Watching any cosplay video, it seems obvious that creating some of these characters is not easy.  From the Marvel Cinematic Universe’s Wanda Maximoff to Joyce Byers of Stranger Things, it is hard to believe that it is the same person playing all these different characters. And yet, it is.

For many of these content creators, a huge part of bringing these cosplays to life not only involves getting the look right, but also the mannerisms, the accent, and the background. It’s important that creators visually construct a world where the audience usually sees or imagines these characters. Some, like Browski, do it through the interesting use of light, setting, and visual effects. For instance, in order to bring her ASMR cosplay of Katara from the show Avatar: The Last Airbender to life, she wanted to showcase the character’s waterbending powers. But what looks like a simple animation added six hours to her editing time.

The visual impact of these videos is one thing, but according to Amy Kay, the intense fandom around some of these characters also adds to the pressure.

“I do get pretty mean comments from people who are just very like, ‘That’s not exactly how they talk,’ or ‘They didn’t do this,’ or ‘This timeframe isn’t correct,’ just trying to show that they know so much more [about] that fandom than me,” says Amy Kay.

However, in preparation for a video, she spends hours researching the characters. “I’ll go through the media and pick out lines that this character actually uses to add to the video,” she says.

Since a lot of content creators that got into ASMR started out as part of these fandoms, most will create content that they are familiar with—but for most content creators, there is always that one character that trips them up. Among the creators Passionfruit spoke to, there does seem to be an agreement that Star Wars has the most intense fandom, especially when it comes to the franchise’s characters. Amy Kay says that when she first started doing cosplay, she dressed as Padme Amidala from the Star Wars prequel movies. But the amount of comments she got about her mistakes were intense.

“I was very small at the time and I mispronounced one of the planet’s names and I got hundreds of comments of people just bashing me for mispronouncing it,” she says.

Davis says that the Star Wars fanbase’s criticism is,“definitely something I’m aware of. They have megafans. When doing Star Wars related cosplay I will research the video for a month, looking up [details] on Wikipedia like which planet would this happen or something like that,” she says.

ASMR creators don’t just cosplay as existing characters. Through her channel Whisper Winds, Davis has opened up a whole new realm in the world of fantasy fiction ASMR. Taking it a step further than other creators, she has created a set of characters all living together in an imaginary port town—each with their own specific quirks and personalities.

“Even in my own fantasy world, there are fans who notice inconsistencies, so I have to be careful,” she says.

Viewer interest in one of her original characters,  Knobb the goblin, was so high that she created an alternative ASMR channel and Twitter feed specifically for that character in August. She was surprised by the popularity of Knobb, because the persona is mean and will tell you things bluntly—like whether or not you need to work on your look for a potential date.

“I wanted an unusual character that would be funny and dark on the Whisper Winds channel, people really liked her and every time I did an audience poll I would get, ‘We want more Knobb’ or ‘Bring Knobb back’ and so I thought I would create a channel just for her,” she says. Since creating the channel this past July, Knobb has amassed 400 dedicated fans.

Ultimately, despite the difficulties they face, these ASMR cosplay creators continue to bring life to characters that they themselves love. And, for most of them, the audience response has only encouraged them to experiment more.

“With roleplays there is a lot of interaction with the viewer, and as a viewer, you get to feel like a main character,” Gibi explained. “It’s also a great way as a creator to share fandoms that you love with your audience. After posting a cosplay video, I absolutely adore going through all of the comments and geeking out with everyone.”

Amel Ghani is a freelance journalist based in Lahore Pakistan. She is interested in exploring how people interact with technology and the impact it has on culture and society. She also writes about the environment, politics and human rights issues. She tweets at @amelghanii