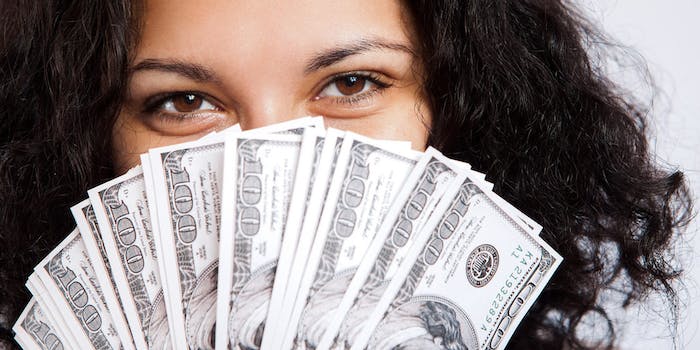 The ugly truth about why women are paid less than men

And it's not because they don't know how to ask for raises.

April 14th was Equal Pay Day, the day when we celebrate the fact that everyone gets paid fairly for the work they do, because this is the 21st century and no one is ever discriminated against based on gender, race, sexuality or anything else.

Just kidding! Equal Pay Day is actually about recognizing the fact that two people with the same work experience can be doing the same job for the same company and still earn totally different wages because on some level we as a society believe that certain types of people are better than others. Which is terrible, right? We’re not supposed to talk about these things, though, which is why we made up the myth that America is a meritocracy where anyone can grow up to be president and poor people are poor because they just don’t try hard enough. But honestly, it’s pretty obvious to everyone who’s ever seen a statistic that pay inequality is Still A Thing.

This year, the Levo League led a widespread push on social media convincing women to be more assertive when negotiating their salaries. The hashtag #ask4more started trending, and celebrities including but not limited to Sarah Silverman, Lena Dunham, Amy Poehler, and Kerry Washington all spoke out about how important it is for women to ask for raises.

And in the days since Equal Pay Day, the hashtag campaign marches forward on Twitter, giving women even more tips on how to negotiate their salaries and fight for benefits.

#AskForMore. Ask your boss for more. Not the govt. Big govt creates nothing but problems. #EqualPayDay

All of this was fine in and of itself; the hashtag was everything a good hashtag should be (short and to the point), the celebrity soundbites were inspiring, and there were plenty of solid tips being offered on how to negotiate a pay increase.

But there was little to no discussion about the social and cultural circumstances that led to the wage gap in the first place. I mean, how can we talk about an issue when we’re unwilling to discuss where the issue comes from? Not only that, but  you can’t fix a problem from the bottom up. While it’s great that we’re empowering women to be more assertive in the workplace, the onus shouldn’t be on women to fix the wage gap.

While it’s great that we’re empowering women to be more assertive in the workplace, the onus shouldn’t be on women to fix the wage gap.

It’s a known fact that men are more likely to negotiate wages or ask for pay increases, but the wage gap doesn’t exist because women are total pushovers who don’t value their skills. Of course, women should be encouraged to ask for the wage they think they’re worth, but it’s weird and inaccurate to imply that the main reason women earn less than men is because they lack negotiation skills.

The truth is that women are paid less because our work is valued less. Employers believe we’re less competent than men; if we’re successful at our jobs, it’s either because we’re bitches or else we’ve slept our way to the top. Our experience in the field (especially if interrupted by a maternity leave or two) is not considered to be as relevant as a man’s experience. We’re often seen as an employment risk because we might get pregnant or have to take time off to care for sick children or we might need to leave on time every single day to pick up our kids from daycare on time.

It’s also worth nothing that asking for more is a tactic that’s mostly going to benefit middle- and upper-class women working in professional settings. Why? Because the wage they earn is directly correlated to their experience and performance, which makes it easier to ask for a pay increase as a reflection of their hard work.

On the other hand, women working minimum wage service jobs often feel like they don’t even have the luxury of asking for a raise; they’re too afraid of being seen as a difficult employee, too worried about being replaced by someone else who will gladly work for low pay. It’s tough to negotiate a pay increase when your boss is literally only interested in hiring people who are willing to work for the lowest legal amount.

The truth is that women are paid less because our work is valued less.

On top of that, the wage gap shouldn’t be seen as some kind of binary problem where men just make more than women; it’s a lot more complicated. You’ll often hear people citing the statistic that women make 77 cents for every dollar their male counterparts earn, but those numbers don’t really give an accurate reflection of the situation. White women make 77 cents for every dollar that white men make; Black men actually typically earn 76 cents for every dollar paid to their white male colleagues. Black women earn just 64 percent of what white men earn, while Latino men and Latina women fare even worse—at 60 percent and 56 percent of the white male dollar respectively.

Racism and misogyny are just two layers of many intersecting forms of oppression we could apply to this discussion—we could also look at pay inequality through the lens of ableism, homophobia, transphobia, or any number of other types of marginalization. So while it’s easy to write the wage gap off as “men make more than women,” the truth is that examining who earns what is more like looking at a ladder of what people our society considers to be most valuable, with straight white able-bodied men as the top rung and everyone else spread out beneath them.

We could also extend this metaphor to say that the lowest rungs get stepped on most often as everyone tries to rush to the top, meaning that when we erase less privileged women from this discussion by sharing the 77 cents statistic, the marginalization they face only increases.

Pay equality is something that requires immediate action, but #Ask4More doesn’t offer any kind of reasonable solution. Instead of telling women that they should just ask for more money, we need to start putting pressure on employers to close the wage gap. We should be fighting to increase the minimum wage to an actual living wage that won’t leave those working service jobs living in poverty.

We should also be demanding that more CEOs emulate Dan Price of Gravity Payments, who recently cut his salary from $1 million year down to $70,000 so that he can start paying all of his employees a minimum of $70,000 a year. And we should be advocating for more big companies to just flat out get rid of salary negotiation, the way that Reddit recently has. Why should an employee’s compensation be a reflection of how strong their negotiation skills rather than their education, experience or work ethic?

Levo’s intentions are good and its campaign is slick as hell, but let’s be real: improving women’s confidence when it comes to wage negotiation is, at best, only a small part of closing the wage gap. And it seems to me that when we focus so much attention on this idea that women just need to ask harder, it becomes easier to blame women if their pay doesn’t increase.

There are so many other ways of solving the wage gap that don’t fixate on what women are or aren’t doing right in the work place. Let’s look to those before we start telling women to ask for more.

Anne Thériault is a Toronto-based writer, activist and social agitator. Her work can be found in such varied publications as The Washington Post, Vice, Jezebel, The Toast and others. Her comments on feminism, social justice and mental health have been featured on TVO’s The Agenda, CBC, CTV, Global and E-talk Daily. She’s really good at making up funny nicknames for cats.