This is quite the religious statement. 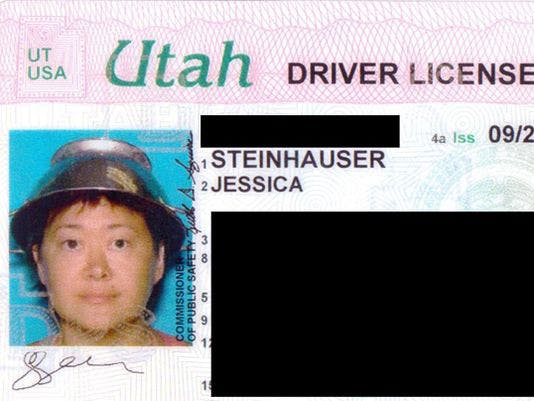 Photo via The Spectrum

Lemmon’s headgear was intended as a nod to the Church of the Flying Spaghetti Monster, the formal name for Pastafarianism, the satirical religious organization that chose a giant pasta strainer as its official headwear.

Although the federal government only allows headwear in driver’s license photos for religious reasons, Lemmon, who self-identifies as an atheist, said she was pleasantly surprised that the state of Utah allowed her to sport the pasta drainer to express her Pastafarian beliefs.

“I’m a really proud, outspoken atheist,” she told the Spectator. “I am proud of Utah for allowing freedom of all religions in what is considered by many to be a one-religion state. I wanted to see if I could [wear the colander] in Utah. I wasn’t sure if they would let me.”

Lemmon has also posted photos on her Facebook page of her children wearing colanders on their heads in support of the Church.

The Church of the Flying Spaghetti Monster was originally founded in 2005 to protest the Kansas State Board of Education’s decision to teach intelligent design as an alternative to evolution in its state curriculum. In an open letter, church founder Bobby Henderson described his belief in a Flying Spaghetti Monster that created the universe, dubbing the religion “Pastafarianism.”

While neither Lemmon nor Hammond encountered resistance from government officials, other Pastafarians haven’t been so lucky. In 2013, DMV officials called the police on a New Jersey man who refused to take the pasta strainer off his head for his driver’s license photo.