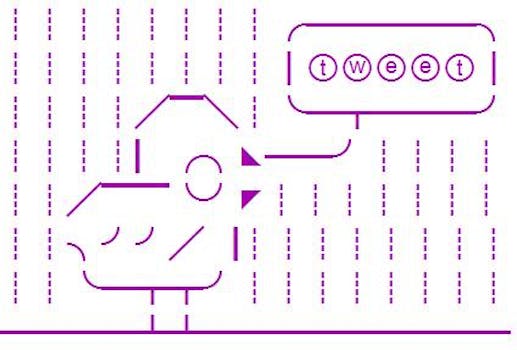 Several artists use Twitter to create art. They not only want you to share it. They want you to alter it in your own style

Easy replication and brevity have rarely been indicators of fine art.

If you can copy and paste something, most people aren’t likely to think of it as a work of art. The same goes if you can easily distribute it to the masses with just a click of a button.

But for the small, yet thriving, Twitter artist community, the more people who reproduce their small pieces of two-dimensional line art, the better.

Twitter art is about art for art’s sake, propagation and having fun, said Matthew Haggett, of Portland, Ore., who runs @tw1tt3rart, one of the largest Twitter art accounts around.

“My #TwitterArt is more about communicating (rather) than self-expression,” Haggett said in an email interview with the Daily Dot. “I really love the community. We definitely inspire and support one another.”

Larry Carlson (@om_sun) said he coined the hashtag #twitterart more than two years ago, never really expecting the form to take off. For him, Twitter was “a sketchpad” used to doodle,” Carlson said in a email interview with the Daily Dot.

“I make Twitter art just to fuck around,” he said. “I think of it more like doing graffiti. I just want to fuck up people’s Twitter stream with abstract, nonsense typography.”

And unlike graffiti artists who have an unwritten code that includes never altering another persons creation, Twitter artists have no problem tweaking each other’s work.

For example, over the last few months Twitter artists Anna Maria Bonanese (@karen_eliot) and Gregory Wadsworth (@aggregart), have worked on numerous art pieces together for the micro blogging site. On Sept. 20, Wadsworth tweeted a ASCII image of a frog in which Bonanese responded with the same image and added “I’ve kissed too many.”

“I like the puzzle-solving aspect,” Wadsworth said. “I enjoy the satisfaction of sliding all the pieces into their correct slots, as someone might with a crossword or jigsaw puzzle.”

“I like the formal challenge of creating art that works in 140-characters-or-less,” he said. “The arbitrary formal constraint is like a poetic form, like writing haiku.”

But unlike haikus, which can be written in different languages, Twitter art is meant to be universally understood.

“I think ultimately what makes Twitter a great art medium is it’s immediacy – my art work is instantly deployed to hundreds of people who enjoy my art,” Fujita said.

While the future of Twitter art remains a bit uncertain, one thing is clear. It is a legitimate art movement that is to be taken seriously, Haggett said.

“I think it is possible that this kind of unicode art will eventually be recognized by galleries, museums, etc.,” Haggett said. “I think #TwitterArt definitely exemplifies the way that people turn anything and everything into a medium for art — the way that people seem compelled to put art in new contexts and mine unexpected areas for new source material.”