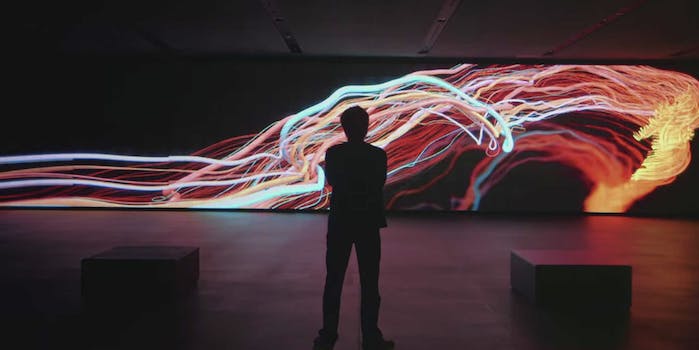 “Don't worry, we didn't do any physical breaking and entering."

A group of digital artists known as Hack the Art World are protesting a Google-sponsored art exhibit at London’s Barbican Center. The group uploaded their own “virtual exhibition,” visible to anyone at the Barbican who visits the group’s website.

“Don’t worry, we didn’t do any physical breaking and entering,” the group announced. “We have placed a geofence around the Barbican and installed a virtual exhibition. You can visit our exhibition by surfing to this website if you are inside the geofence.”

The Google exhibit is called DevArt, and intends to display the work of artists working with code. “They use technology as the canvas and code as the raw materials to create innovative, engaging digital art installations,” the show’s page describes.

“Art made with code and computers has been around since the 1950s,” replies Hack the Art World’s open letter to Google. “There is no need to define it as DevArt, and market it as something shiny and new.”

“We can’t afford to work on a piece of art for two months, only not to get the commission in the end,” the letter reads, referencing the competition Google hosted for artists vying for the fourth commission. “We have to pay the rent, and eat once in a while too.”

“It reminded me a bit of those crowdsourcing websites where you can hire a bunch of designers to design lots of logos, choose one of them, pay them peanuts for the design, and leave the others in the cold,” Hack the Art World member Jan Vantomme told Imperica. “This is not good for beginning artists and designers.”

Vantomme also described his concern with the exhibit’s rhetorical fixation on coding and technology, which he says distracts from the art itself. “The language Google used to promote DevArt sounds a bit too much like an advertising campaign,” he said. “There’s too much focus on the code and technology behind art, not on the content or value of the artwork.”

“Technology should be as invisible as possible: if not, it just becomes a cheap trick. If I look at a painting, then I don’t care which brand of paint, or what type of brush was used. I want it to touch me.”