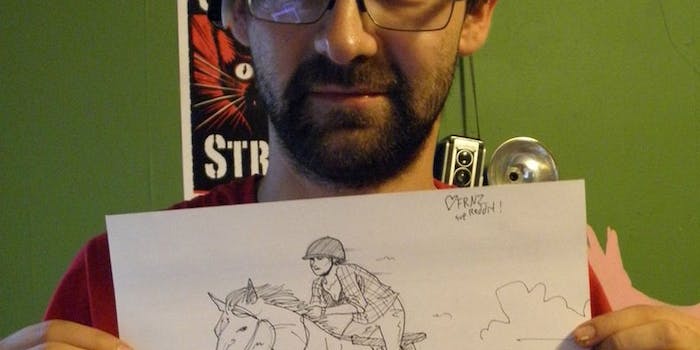 Artist will draw for money, joints or nothing at all

When a redditor offered to draw anything, he had to prove himself.

On Reddit requests for money in exchange for goods are often met with the same response: acceptance, denial, and disillusionment–usually in that order.

This was the case Wednesday night when Dan, an artist from Madison, Wis., made a Reddit post asking people to send him money, goods, or nothing at all in exchange for an illustration.

Dan’s request shot to the top of Reddit’s front page where it collected more than 2,690 comments. Most redditors were supportive (thisisjohnbrown, upvote_girl) and everything seemed to going smoothly for the self-proclaimed “starving artist type” from Madison.

Then came a Reddit post from ArtAnarchy pointing out that sometime ago Dan had traced an illustration from a DeviantArt artist. ArtAnarchy called Dan a douche, swindler, and thief and ushered in a wave of vitriol from more than 3,000 redditors.

“It almost seems like anyone who makes a quirky plea to Reddit in the form of an image post with pictures and texts always turns out to be awful in some way,” wrote mikemcg.

“I downvote every one of these cute little ‘Hey Reddit sorry to bother you but..’ submissions, whether they’re ripping stuff off or not,” wrote carus. “I honestly don’t understand why people support the attention-whoring of these artists/authors/thieves/whoever week after week.”

Dan did his best to explain the DeviantArt tracing incident and challenged ArtAnarchy to an “art duel” to prove that he can draw.

ArtAnarchy didn’t take the artist up on his offer but redditor WhatTheShitIsThis did.

“I nominate a baby panda, riding bottle nose dolphin that is nose deep in the anus of a morbidly obese man in a spread eagle position (like this, but with less cat and more panda-dolphin),” wrote WhatTheShitIsThis. “In the man’s right hand is a scepter; in the left a bag of Doritos. The man has a bib and it’s clear he’s been eating poo. There are fast food bags and adult diapers strewn about him.”

Less than an hour after WhatTheShitIsThis made his request, Dan posted a photos of him and the illustration on his imgur page (probably not safe for work,  NSFW).

The illustration helped turn some skeptics into believers.

“He drew the most obscure thing and drew it well. I think it’s pretty clear that he’s an artist with some ability and not an asshole who traces stuff and is full of shit. I’M CALLING THIS MYTH BUSTED,” wrote suprfli.

“Regardless of the allegations, your artistic skills still far surpass mine and I look forward to when my requests get filled. Your work still deserves any money I’m putting forward,” wrote Frittsy.

The Daily Dot has reached out to Dan for an interview and is waiting to hear back.

Dan claims that he will get to all of the illustrations, in time. He has received more than 700 emails since making the post, according to a photo he posted on imgur. So far, he’s completed at least three requests, including the one for the “art duel.”

In the meanwhile, people should be careful. Reddit is a big community with a lot of stories and pleas for help. It’s up to users to be discerning, wrote g4bravo.

“Yes there are dishonest and manipulative ‘redditors,’ but one of the reasons this site is so great (at least to me) is because it can rally as a community so quickly when the cause is legitimate, wrote g4bravo. “We too have brains, and most of us use them often.”