The truth always comes to light in the comments section.

A mugshot used to be a point of great shame in someone’s life, but no longer. In the age of social media, police precincts have begun displaying photos of the arrested on Facebook like they’re selfies and in doing so have ignited a craze of fine felons. It was Jeremy Meeks who inspired thousands of women to sign up for conjugal visits thanks to his piercing blue eyes and launched the phenomena of #prisonbaes.

But what’s interesting about this particular mugshot isn’t the subject’s extremely expressive pose, but the comment Willie Tatum III left on his own booking photo after being released from the custody of Columbus Police. According to reports from 10TV, the 23-year-old was arrested on Sunday on charges of aggravated menacing and domestic violence after a four-hour standoff with police that began with breaking and entering. After roads were closed and a SWAT team surrounded the property, 10TV reports that things ended peacefully once Tatum surrendered. 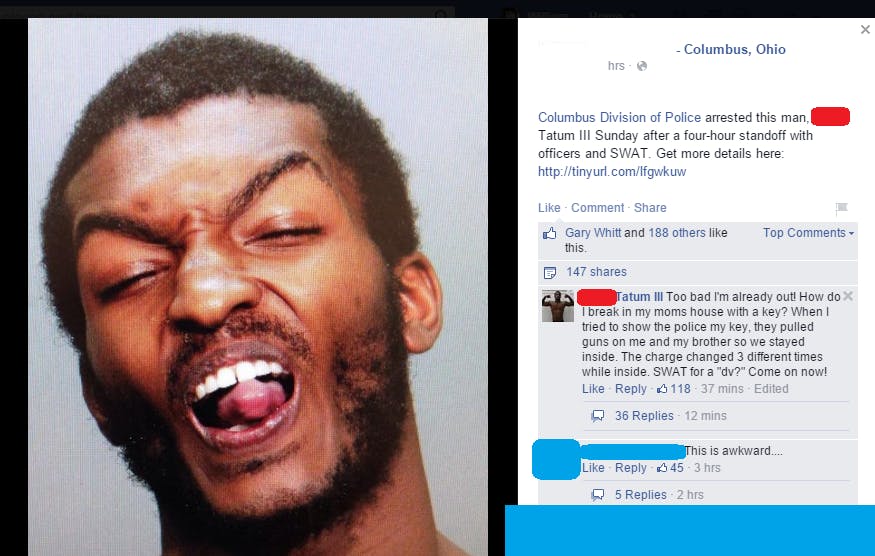 But Tatum wasn’t satisfied with how things were being reported and took to the Columbus Police’s Facebook page to tell his side of the story.

How do I break in my mom’s house with a key? When I tried to show the police my key, they pulled guns on me and my brother so we stayed inside. The charge changed 3 different times while inside. SWAT for a ‘dv’? Come on now!

Though his comment has since been deleted, Reddit has captured the felon’s side of the story. It’s unclear if Facebook photo comments are taken into consideration in cases like this, but we hope so.