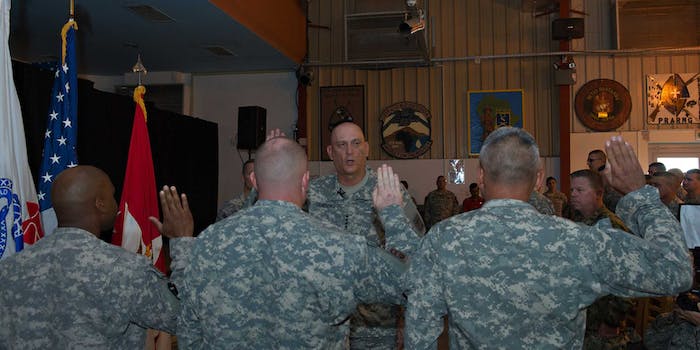 It doesn’t matter that the NSA has access to untold troves of online information. The Army still doesn’t want soldiers to even see a website that proves it.

In an email to the Monterey Herald, Gordon Van Vleet, public affairs officer at the U.S. Army Network Enterprise Technology Command (NETCOM), admitted that “the Army is filtering some access to press coverage and online content about the NSA leaks.”

Van Vleet specifically referenced that from his Army Internet connection, he couldn’t access articles on the Guardian’s British domain. The Guardian has a somewhat confusing nationality: it’s a British paper whose U.S. edition is separately incorporated in the U.S. Regardless, it was the first to publish the blockbuster slides that detail the existence of the NSA’s PRISM surveillance program, and those slides are on paper’s British .co.uk domain.

Those PRISM slides, leaked to the Guardian and the Washington Post by former contractor Edward Snowden, were and remain classified information. Van Vleet noted that it’s routine procedure for the military to internally block access to classified documents. “The Department of Defense routinely takes preventative ‘network hygiene’ measures to mitigate unauthorized disclosures of classified information onto DoD unclassified networks,” he noted.

Of course, this being the Internet, those PRISM slides have been widely copied and republished. In addition, seemingly every news outlet has written about those slides and analyzed their implications (this is the 44th story the Daily Dot has published involving PRISM, for example). Van Vleet didn’t indicate in his that the Army has blocked access to all those other publications, though he didn’t immediately respond to the Daily Dot’s request to verify that point.

Though blocking access to a newspaper for sharing widely-available information seems pointless, it’s in accordance with existing protocol. On June 7, the day after the Guardian first leaked those slides, the office of the Secretary of Defense issued a memo instructing all members of the military, and all independent contractors, to avoid classified information they found online.

“The offending material will be deleted by holding down the SHIFT key while pressing the DELETE key for Windows-based systems and clearing of the internet browser cache,” the memo reads. Too bad for the Department of Defense that doesn’t apply to civilian computers.

H/T The Dissenter | Photo by The U.S. Army/Flickr