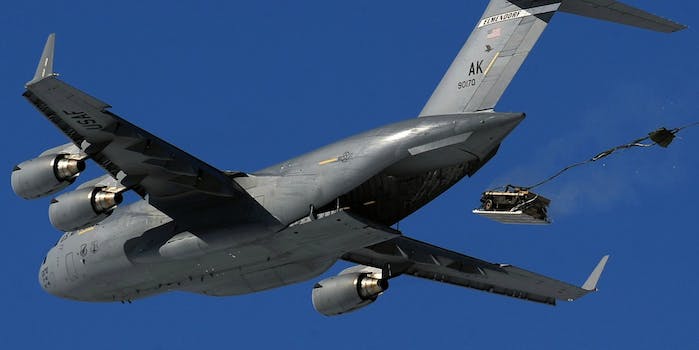 What a thrilling failure.

Perhaps you’ve never wondered about how the U.S. Army speedily transports Humvees across great distances, but apparently, the vehicles are often dropped from airplanes, with parachutes attached.

And sometimes those parachutes fail.

As the Tactical Air Network reported, a number of Humvees were dropped by the 173rd Airborne Brigade at the Joint Multinational Readiness Center in Hohenfels, Germany, during the Army’s regular combat training exercises. Not one, not two, but three Humvees (official name: High Mobility Multipurpose Wheeled Vehicles) disconnected from their rigging and crashed explosively into the ground.

Much to the joy of the dudes filming this video below.

The Tactical Air Network explained that Humvees, before they’re dropped from an airplane, are placed onto metal pallets along with three 100-foot diameter parachutes, while pads and pieces of lightweight wood are inserted underneath the vehicles to help absorb the shock of a landing. The C-130 plane carrying the Humvees then decreases speed to 160 mph and opens its rear cargo door. Attached to the pallet is a smaller parachute, the drag of which then whisks the entire vehicular package into the sky.

Soon after its journey begins, the larger parachutes are supposed to deploy for a normal ride back to earth. Supposed to.

“Any number of things could’ve gone wrong with this particular airdrop, including improper rigging, or high winds which would have had the effect of disturbing the drop,”  Tactical Air Network reported.

So tough break for the U.S. Army, though it’s fortunate there were no human causalities. But it’s not always Humvees that have trouble making it back down to earth safely.