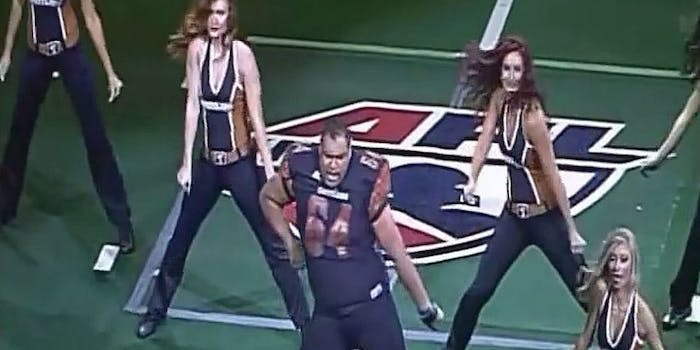 If there were touchdowns in

The Arizona Rattlers are one of the best teams in the Arena Football League this year, and considering they’ve won three straight league championships, it’s safe to say that the Rattlers are the model AFL team of the past half-decade.

Halfway into this routine by the Sidewinders, the organization’s dance team, we get a surprise: a big old football-player-looking dude absolutely tearing it up, complete with a climatic split.

It would be strange of the Rattlers to let one of their players to participate in the routine, especially because this probably took place during halftime or a timeout, meaning No. 75 should have been huddled up with his teammates instead of dancing with the Sidewinders.

Except it’s all a trick. The Rattlers don’t carry a No. 75 on their roster, and as the Washington Post explained, Big Oscar Hernandez is a dancer and choreographer and thus, sadly, not a football player.

According to his biography on the Pro Action Dance website, Hernandez has worked as a choreographer for NBA and WNBA teams for more than a decade, in addition to his work with the Rattlers and the NFL‘s Detroit Lions.

Obviously, he’s one hell of a dancer, and he also happens to look good in a football uniform.